Have you ever considered having your kiddos raise their own tadpoles? Maybe your child wants to learn more about metamorphosis? If the answer is yes, then I’ve got some amazing frog resources to help you create an awesome frog life cycle unit study for your kids! 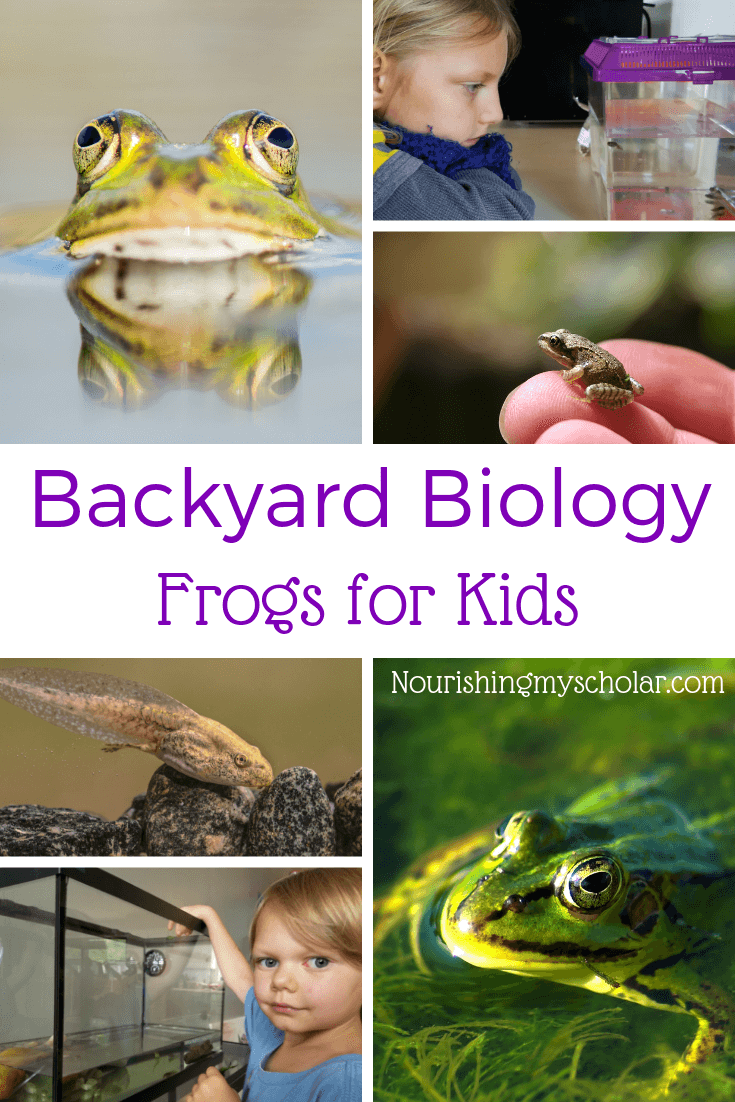 *Disclosure: I received Frog Hatchery Deluxe Kit, Live Bullfrog Tadpoles, Large Critter Habitat, and Frog Tadpole Food at no cost and was compensated for my time in exchange for an honest review. I was not required to write a positive review. As always, all thoughts and opinions are my own. I only choose to share resources that I would use with my own family and those that I believe other families will enjoy and benefit from.

Have your kids ever come home with a pocket full of squiggly tadpoles? Perhaps they’ve excitedly shown you a slimy frog they found while playing in a nearby pond?

Did you know that these are excellent interest-led educational opportunities?

This is the type of natural curiosity that I love to build on with books, documentaries, and hands-on activities. 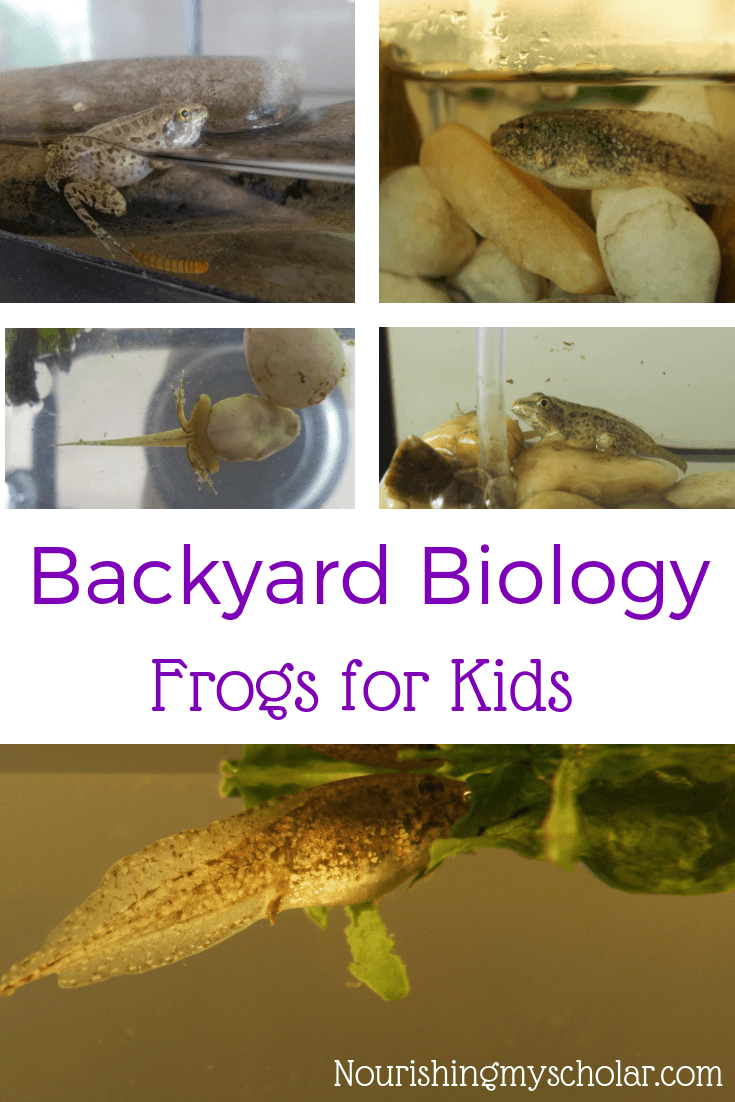 At the beginning of spring, the children and I were planting some new roses bushes on the side of the house. As my daughter pulled up a big stone she squealed in delight at what she saw.

Yes, my children get excited about science, even the strange and weird kind.

The children hypothesized about how the poor frog met his demise and what could have caused the mummification process. Then they wondered how old he was and if he was indeed a he or a she…

This one incident began an obsession with frogs.

Later in the spring, my son discovered an old toad living in our front flower beds. The children would catch him occasionally and observe him before releasing him back into the petunias.

They call him Trevor.

I think the name suits him.

For the rest of spring, every nature hike near water consisted of a frog hunt!

My kids tend to become obsessed with their interests.

But, what’s not to love about frogs? I mean, sliminess aside… they are quite fascinating creatures!

If you need some great books on frogs, then check out 10 of the Best Frog Life Cycle Books for Kids! These are all of the books I strewed throughout the house during this delightful unit study.

Here are a few more resources that we utilized while learning about frogs: 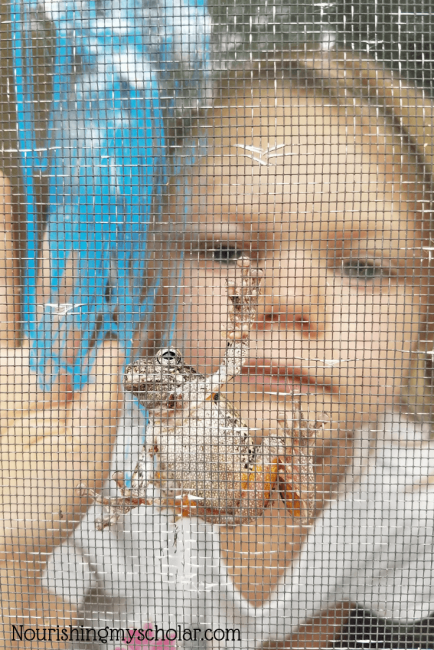 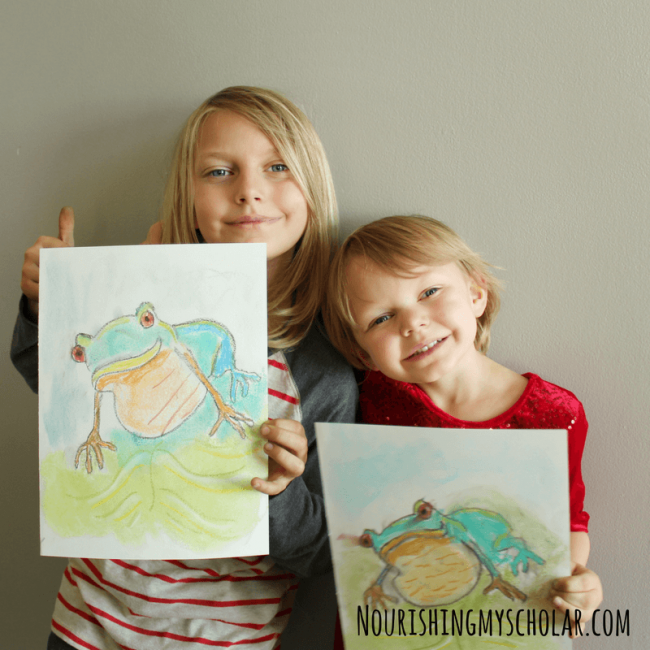 Even though your kids may KNOW that tadpoles change into frogs, it’s a totally different experience to WATCH the metamorphosis take place.

Raising tadpoles is a fantastic way for your kids to engage in a hands-on, interest-led nature study on frogs, and connect with nature.

But not all of us have access to a pond or pool that contains frogspawn. So imagine my excitement when I discovered I could order our own Bull Frog Tadpoles from Home Science Tools!

Home Science Tools has everything you need for all your science needs from home microscopes to raising your tadpoles into little froglets. My kids couldn’t have been more excited when our tadpoles arrived!

*Did you know that Home Science Tools has a perks program in which you receive a $5 off coupon?

Watch the video above to see my daughter counting, in Spanish, our new bullfrog tadpoles! 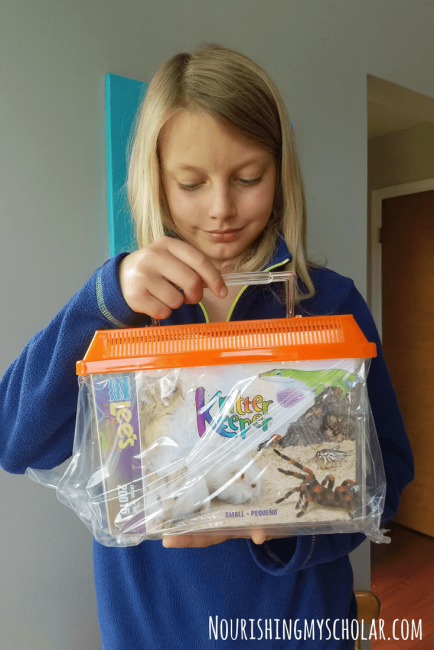 Our Frog Hatchery Deluxe Kit came with everything we needed to grow leopard frogs that we sent for separately in the mail. We got the Large Critter Habitat for catching and observing any frogs we encountered while hiking or in our backyard….or toads like Trevor! 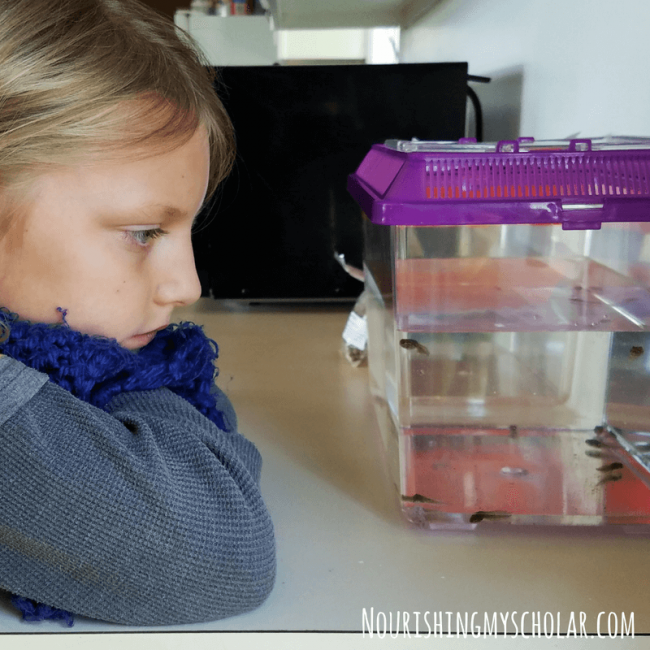 Watching the Life Cycle of a Frog

My little herpetologists decided to set up a larger observation tank for their tadpoles using a 10-gallon tank we already had on hand. The kids put an aerator underwater and covered it with stones. We wanted just a small amount of air circulation without disturbing the water a tremendous amount. 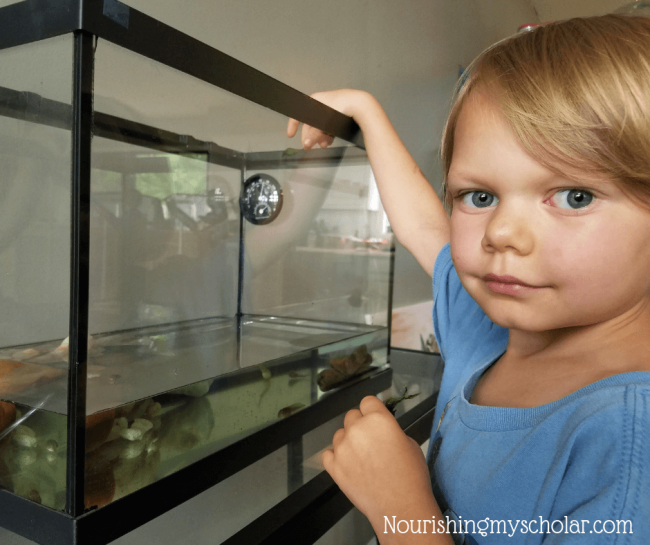 We fed our tadpoles the Tadpole Food from Home Science Tools. The tadpoles also enjoyed a diet of boiled spinach that had been left out to dry! Remember, at this stage tadpoles are mostly herbivorous.

Watch the video above to see my daughter feeding our tadpoles dried spinach leaves! 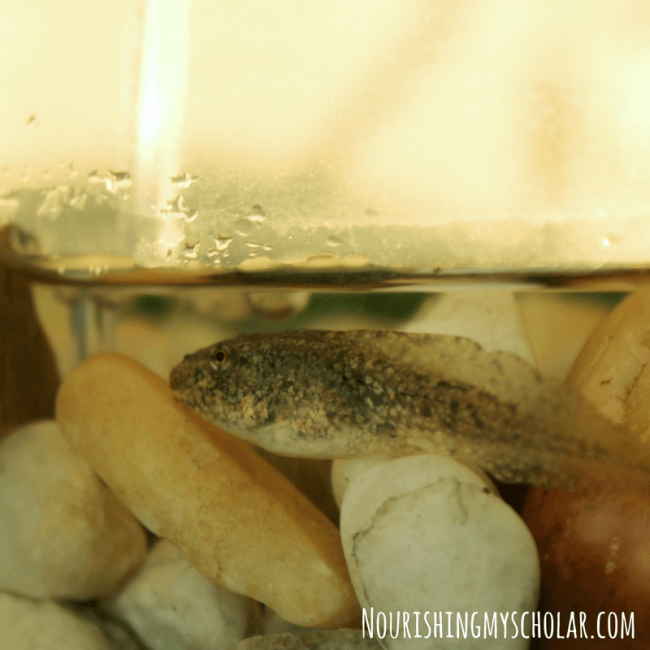 Raising tadpoles is such a cool experience! Almost daily we could see changes happening to our little cold-blooded friends! It was amazing to watch. One day they had their little tails and gills, and then as if by magic, there were these little leg nubs! 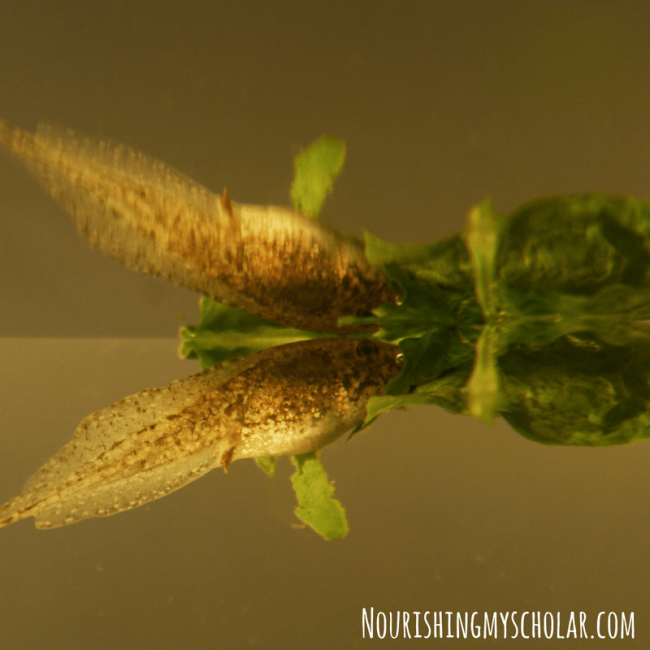 Watch the video above to see my son’s excitement over frog metamorphosis!
After the tadpoles back legs had formed, they started growing little arm nubs! 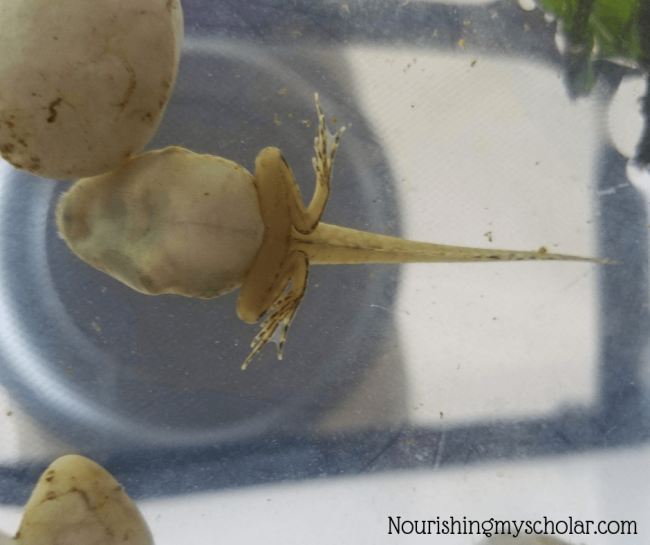 One day you go and look at the tadpoles and you realize their tails are shrinking too! 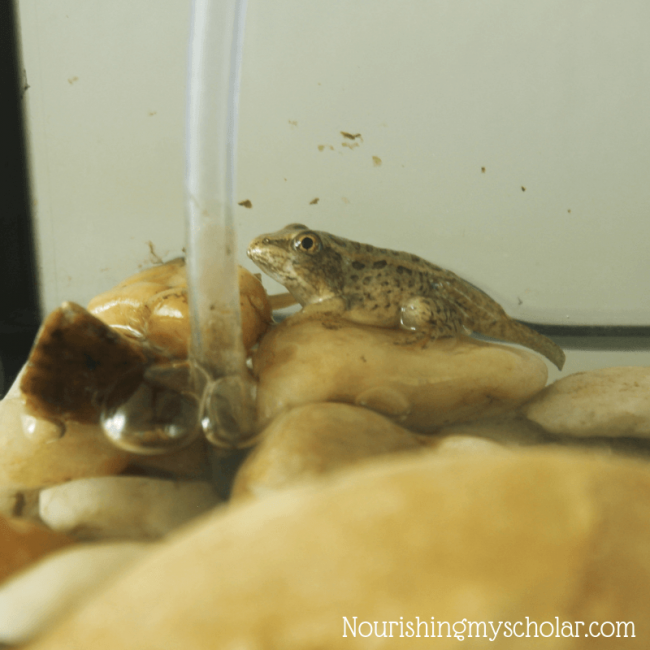 Doesn’t our little froglet have the cutest tail nub? Did you know that tadpoles do not eat once they start absorbing their tails? Only once they have completely absorbed their tails do they become carnivores. We feed ours a combination of meal worms and crickets.

Pretty much anything that will fit in their mouths! 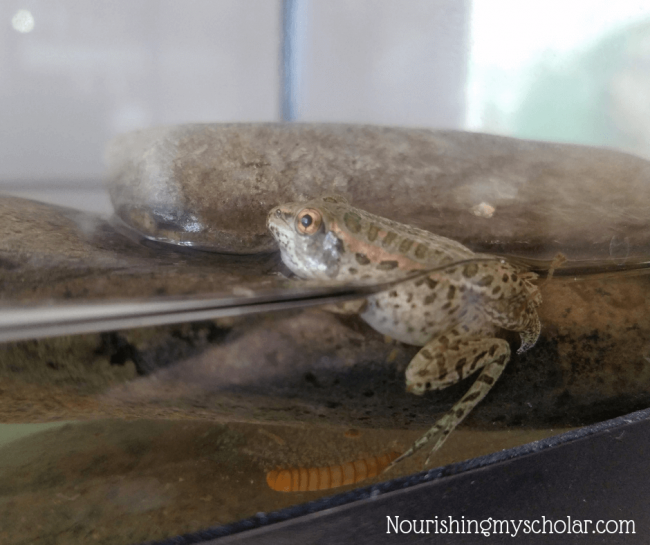 The children’s exhilaration was palatable. There are so many different ways to study frogs:

We are truly just scratching the surface of this amazing animal!

Raising tadpoles has been such an enjoyable and educational experience! It allowed my children’s natural curiosity to expand into a real-world and hands-on way. If you have the opportunity, then I highly recommend this type of self-directed nature study.

Now tell me, have you ever raised tadpoles?

Check out these other resources for learning about frogs!

If you love science, then you may also enjoy these posts: