Caves & Caverns are a fantastic way to study geology! Visiting local caves & caverns can be a great hands-on way to study the formations of Earth’s rocks. Check out these fantastic resources including books and hands-on activities! 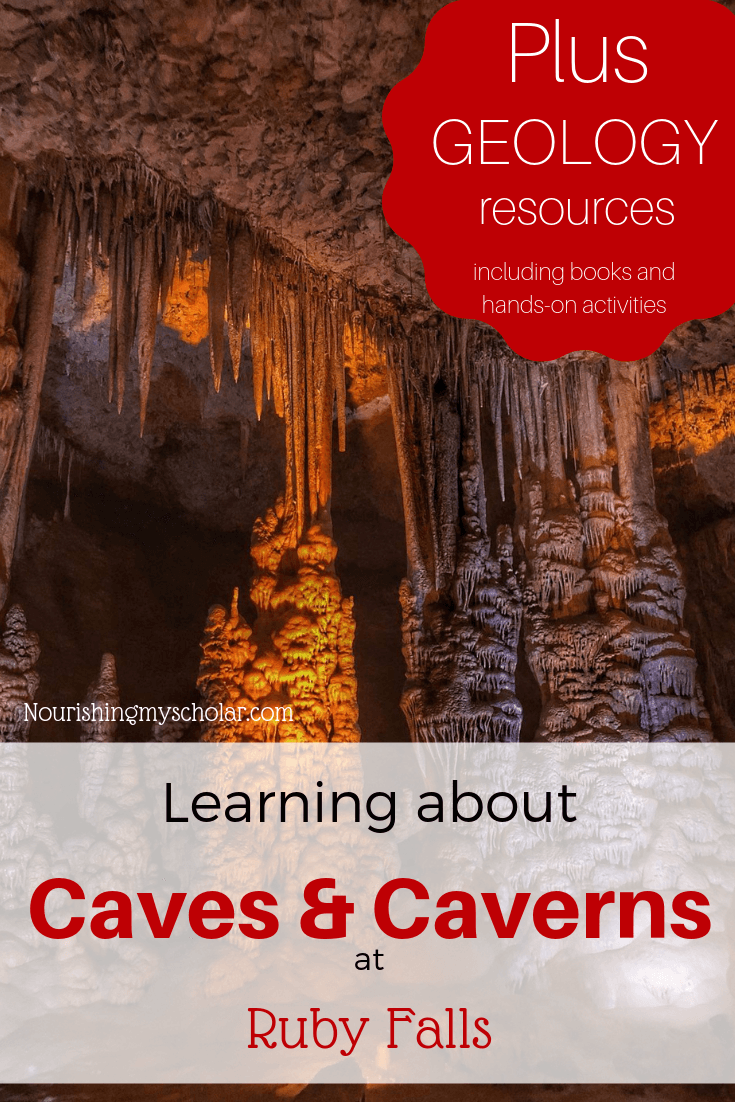 If you live in the southeastern region of the United States, then more than likely you’ve heard of Ruby Falls, Tennessee. This unique underground waterfall and limestone cavern is a favorite destination for many families. We’ve passed by it for years, but we finally made the stop and visited on our last trip back from Atlanta. Wow, what an amazing experience! We learned tons about the different speleothems or cave formations such as stalactites, and stalagmites, plus so much about cave and cavern formations. Did you know there is even a flowstone called Bacon? Seriously, it looked like a slab of BACON hanging from the ceiling! How amazing is that! 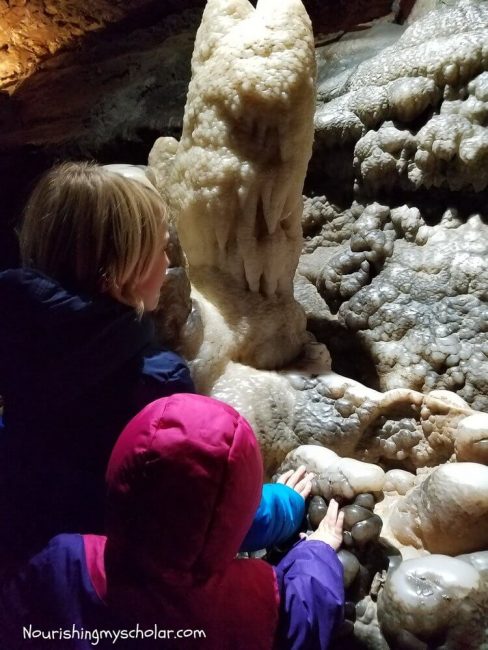 Fun Facts about the Caves & Caverns of Ruby Falls

We even got to touch the cave formations that were no longer actively growing!!!! This big one was called the “Dripping Candle.” 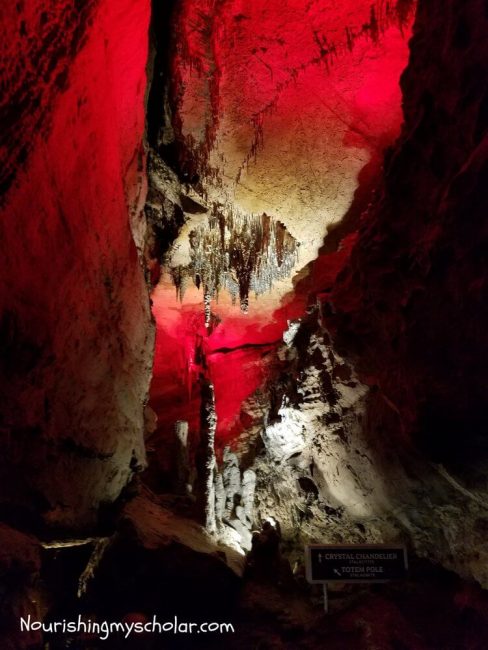 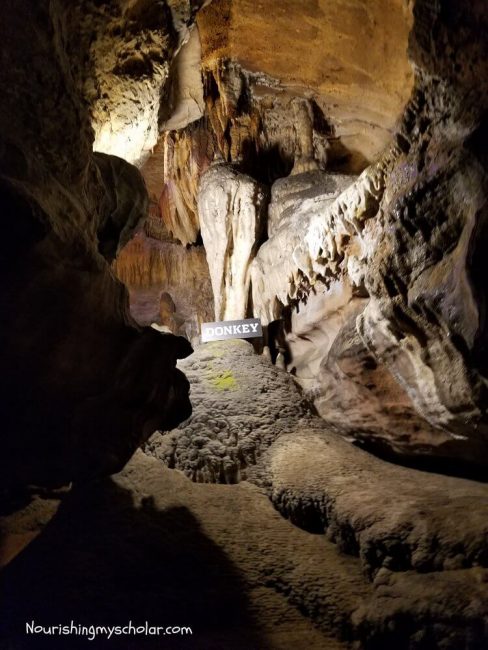 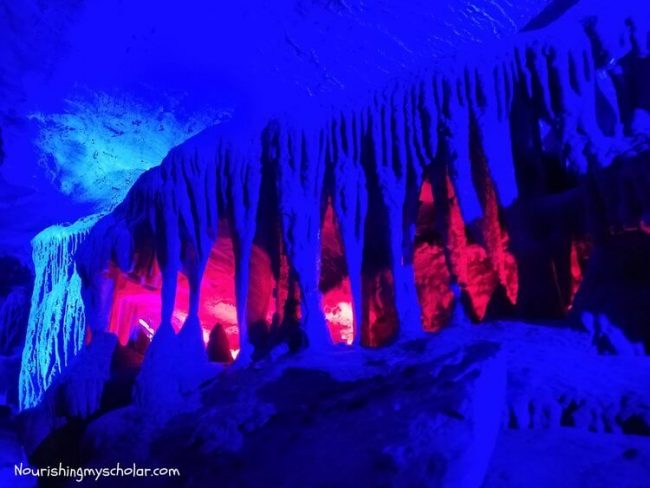 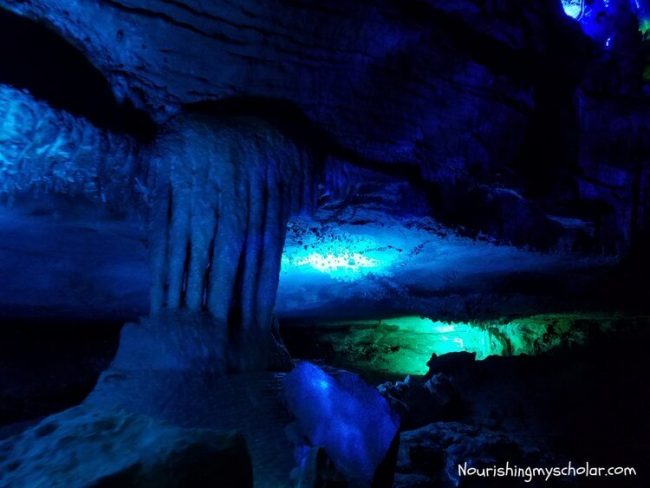 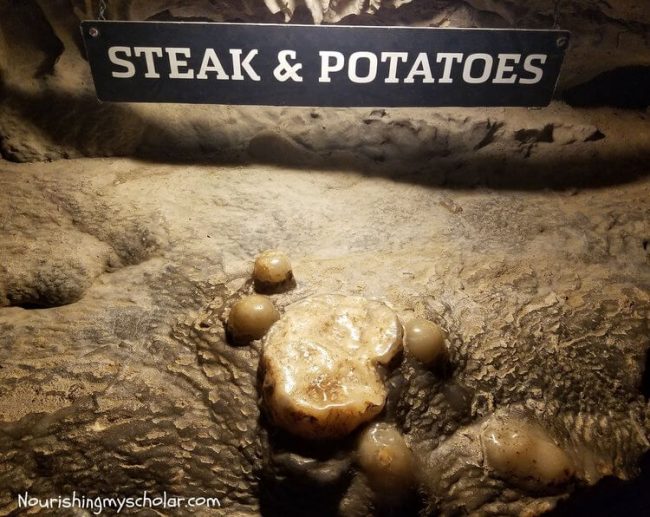 We learned an insane amount about the subterranean world of caves and caverns while visiting Ruby Falls. These caverns are gorgeous and amazing to behold. The kids were in awe and delight the whole time we were underground…that just sounds exciting doesn’t it? 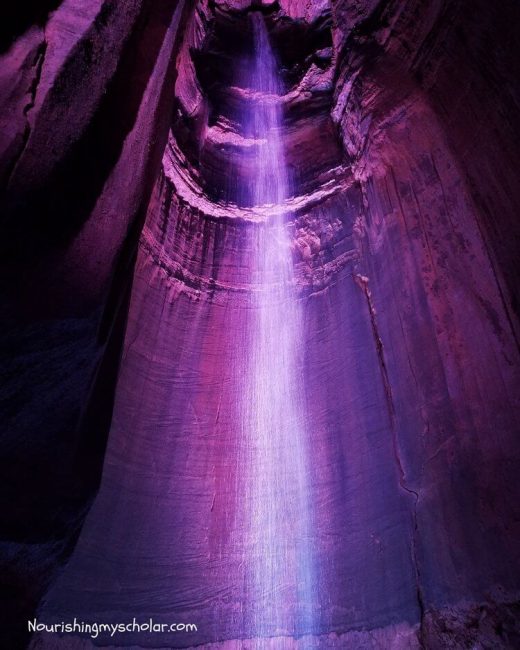 It’s even more exciting when you know you’re 1,120 ft. underground. If you happen to pass through Chattanooga, Tennessee, then I highly recommend stopping for a quick tour. It only takes an hour and a half and it’s always a comfortable 60 degrees! You’ll be so glad you did! 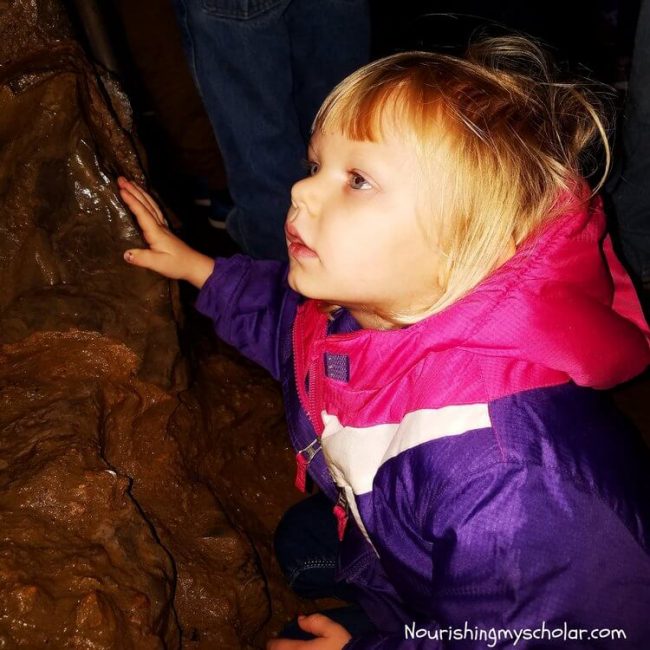 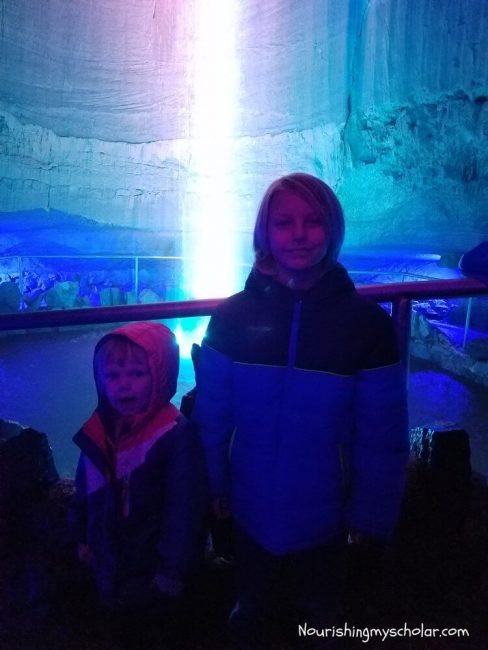 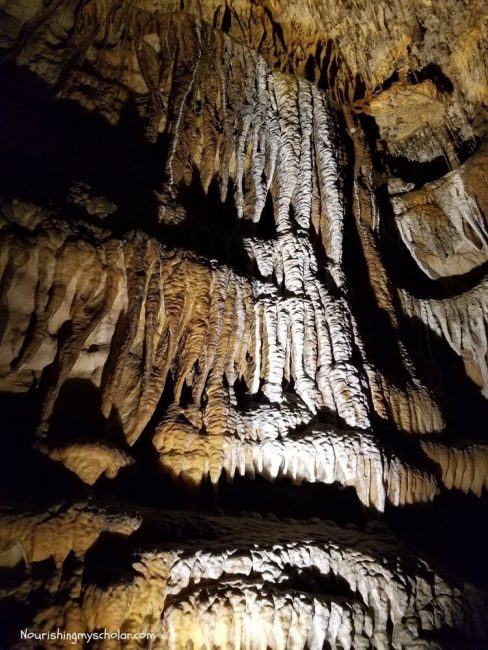 If you want to study the mysterious world of caves or perhaps you don’t have a nearby cave to visit, then here are some geology books and resources that we used to help us learn more about this underground environment.

BBC Video Planet Earth: Caves/Deserts/Ice Worlds narrated by David Attenborough – Enjoy this family-friendly documentary as you are transported to the highest mountains and deepest caves on Earth. This series takes you on an unforgettable journey through the daily struggle for survival in Earth’s most extreme habitats. If you can’t get out to visit a cave, then this documentary is the next best thing! 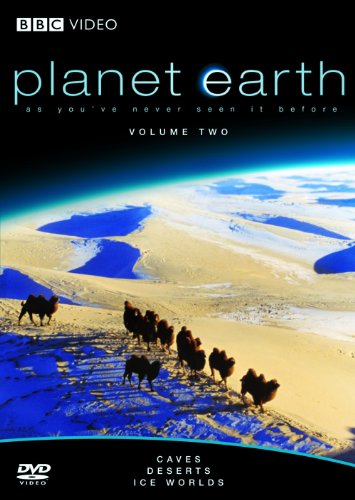 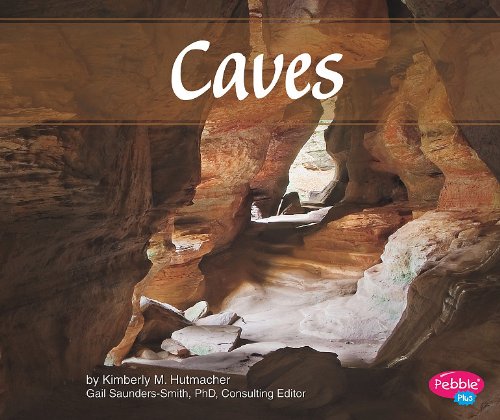 Cave by Donald Silver – From the wriggly-one-celled bacterium to a sleeping grizzly bear, the cave is alive with activity and musty with history. Detailed illustrations and safe activities shed light on a mysterious habitat, complete with creepers, crawlers, swimmers, and fliers–hooters, buzzers, and growlers! 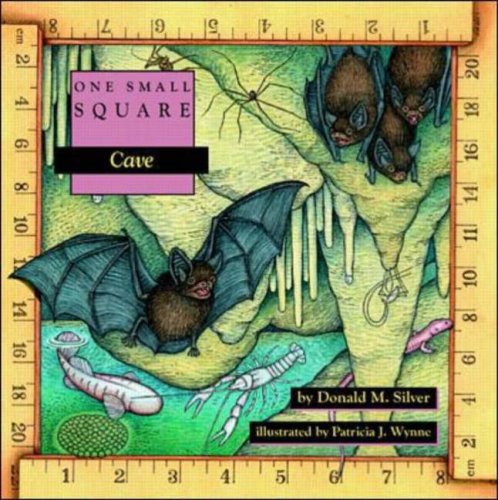 Caves and Caverns by Gail Gibbons – Here is a fascinating journey through those dark, mysterious hollow places on earth–sea caves, lava caves, ice caves, and more. 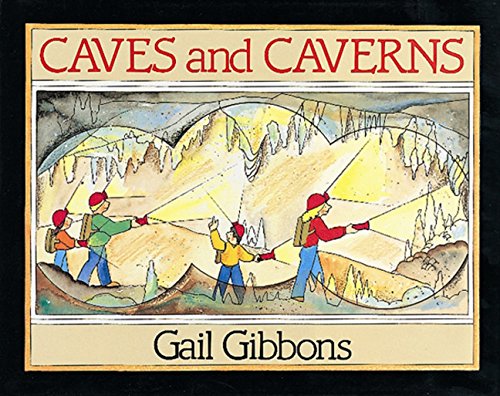 Caves (Nature in Action) by Stephen Kramer –  captivate your readers, by stirring their interest in science with these dramatic photographs of the powerful effects of nature in caves. 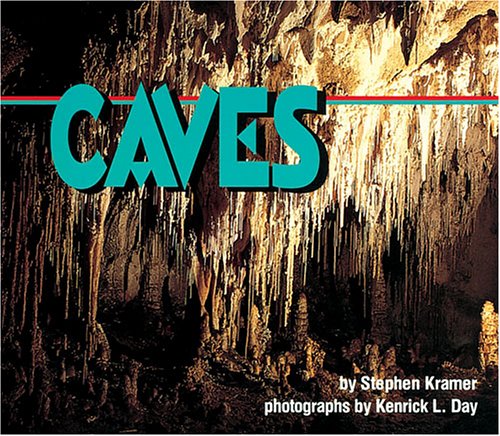 Caves by Cassie Meyer – In this book, children learn about the features of caves, where caves are found, and what makes caves unique. 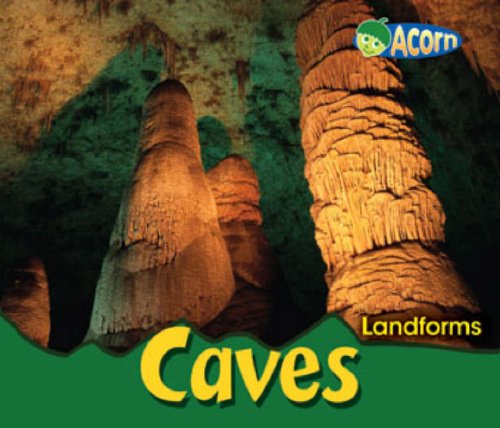 Tell me, are there any local caves or caverns where you live?

You may also enjoy these other science posts: