I once had the idea that if I wanted my children to learn a foreign language, then I needed the most expensive foreign language program available. It boasted of an immersive method that was fun and effective. Except that it wasn’t…fun…or effect… at least not for our kiddos. What was I to do? Our children WANTED to learn Spanish, but every attempt left them frustrated and in tears. I secretly think that our “southern” accents had something to do with that particular program not being able to comprehend our words, but maybe it was our children’s learning style. All I know is that it was a super frustrating and costly lesson, ya’ll!

Then, I swung in the opposite direction of cost, as far as foreign languages are concerned, and tried a couple of free programs… they did not have the desired effect. This mama was feeling defeated and exasperated.

Then I stumbled upon Foreign Languages for Kids by Kids, and oh my goodness, what a delightful surprise! 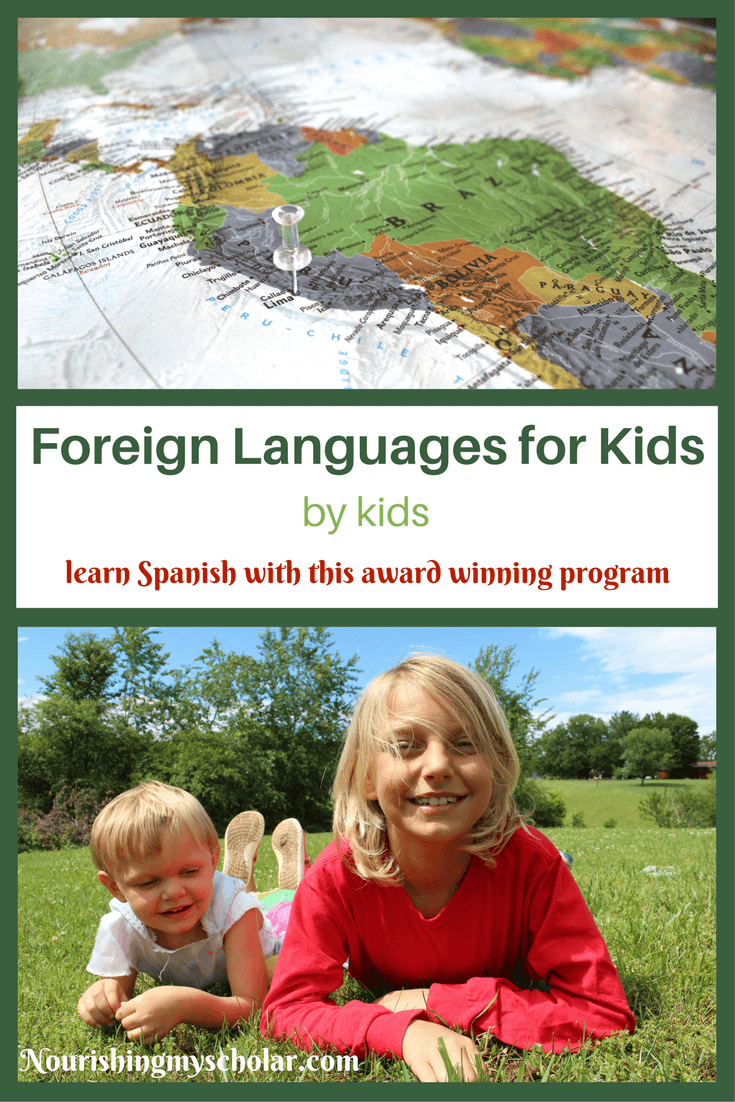 *Disclosure: I received Foreign Languages for Kids by Kids Spanish Starter Set 1 at no cost and was compensated for my time in exchange for an honest review. I was not required to write a positive review. As always, all thoughts and opinions are my own.

This is such a fun program that the children actually beg for it! Seriously, it has been a freeing experience for them! They enjoy this program in a way they never did with all of the others. Plus, they are actually retaining the language. This is huge!

They never retained their Spanish lessons before, but now…when I announce breakfast in the morning, they yell, “el desayuno!” When they take a bite of food, they declare, “me gusta” or “no me gusta!”

Our four year old actually said that the new mint tea I made her was, “no me gusta!”

This mama’s heart is bursting with happiness, folks! Like, lets throw a pizza party and celebrate, kind of happiness! 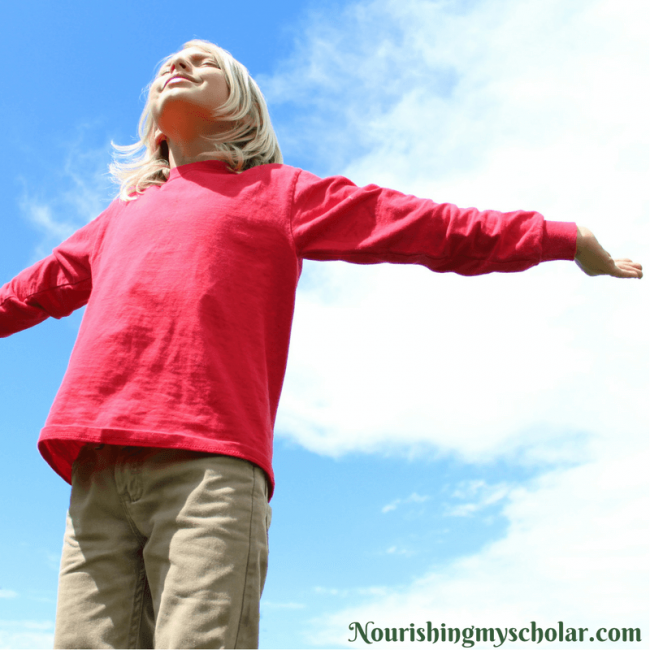 Foreign Languages for Kids by Kids is an engaging program gentle enough for our four year old yet meaningful and practical enough for our nine year old. This is a video series that begins with “Basketballs aren’t for Breakfast” in which we follow three brothers through their breakfast routine. Featuring only kids, the series starts at 8:00 a.m, proceeding through the day with events children relate to, such as birthday parties, soccer games, play dates, getting ready for bed, etc. and ends at bedtime at 8:00 p.m.

Sounds simple, right? That’s because it is!

The engaging video dialogue is entirely in Spanish and creates an immersion experience unlike any other program we’ve used. Both children are able to be involved at the same time. Which is a big plus when you have a little sister that wants to do everything big brother does.

At first the children really had no idea what was being said, but the more they watched it, the more they began to understand! By watching familiar situations in various scenarios, the children picked up the meaning of the Spanish words and phrases and remembered them.

The workbook included practice and review with puzzles, and games that our nine year old really enjoyed. There is a Guide for Teachers and Parents as well as stickers that are intended to be used around the home. The Go Squish game is played similarly to a Spanish speaking version of Go Fish and is fun for the whole family. You know how much we love games, so this is perfect for us! 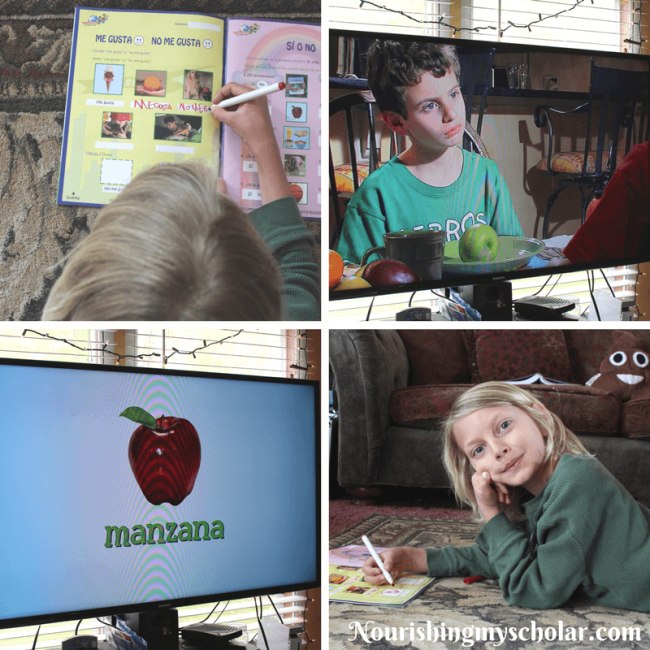 Foreign Languages for Kids by Kids was specifically created for parents who do not speak Spanish. It was also designed to be used without knowing a single word of Spanish. Big plus here folks, as I can’t speak a lick of Spanish…but I want to learn…and I am learning! As I watch the videos with the kids, I am learning right along with them! It’s fun, even for me! 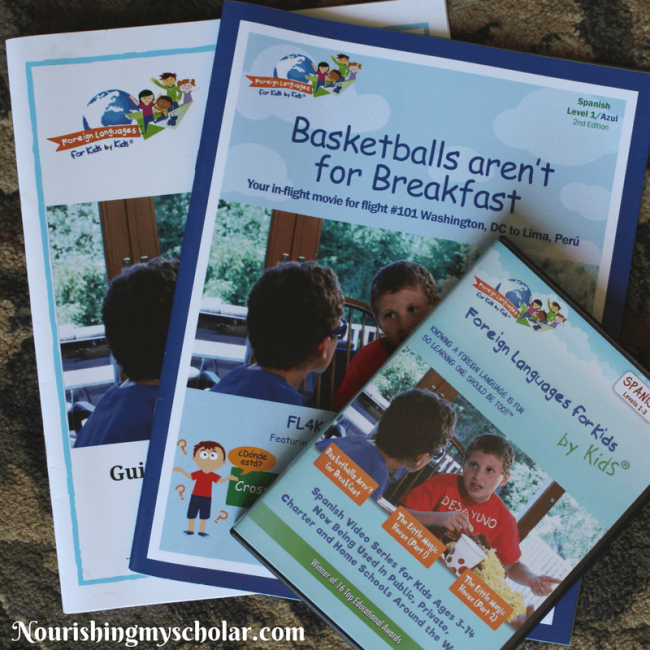 Foreign Languages for Kids by Kids has won a plethora of awards including the Parents Choice Silver award and Top 100 Educational Website of 2016! I love knowing that this is a quality, affordable program that is fun and engaging. For both of my children, regardless of their age difference, this program works! They are both learning Spanish and so am I! Me gusta!