A Harry Potter Origami Sorting Hat Fortune Teller (also known as a cutie catcher) was exactly what we needed as we finished “Harry Potter and the Sorcerer’s Stone” for the umpteenth time! It’s always bittersweet when we finish one of these wonderful books by J. K. Rowling. She is an expert at drawing you into a story and making you feel as though you are in the characters shoes, so to speak. One of the first nail-biting moments of the book is when Harry is to be sorted into one of the Hogwarts Houses and the Sorting Hat is placed on his head. “Not Slytherin. Not Slytherin,” he whispers quietly to himself. 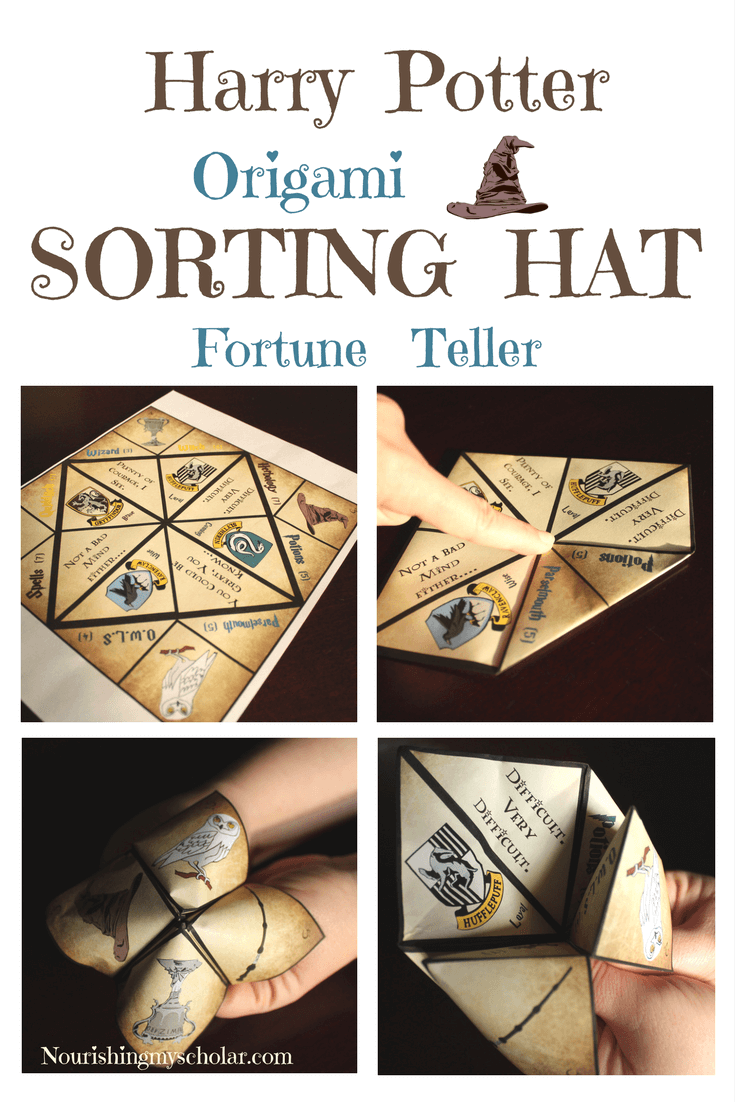 All this week our son has been dressing in his Gryffindor Robe and Sorting Hat! He says he does his best reading (even when it’s not Harry Potter books) when he’s wearing them. Inspired by both “Harry Potter and the Sorcerer’s Stone” and our son wearing his Sorting Hat and robe all week, I’ve come up with this Harry Potter Origami Sorting Hat Fortune Teller. Try it and see if you’re; just and loyal like Hufflepuff, wise and of a ready mind like Ravenclaw, cunning like Slytherin, or brave and daring like Gryffindor.  I hope you enjoy it as much as we did! 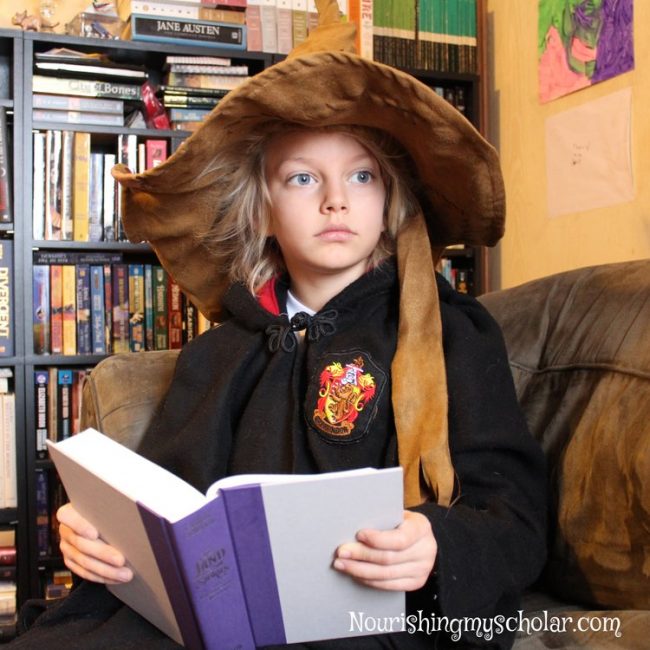 Cut off the white edges of the square pattern you printed. 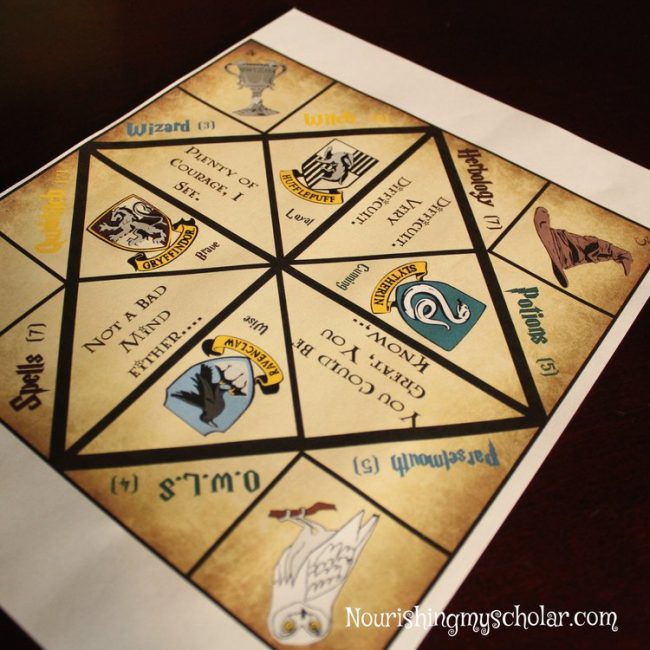 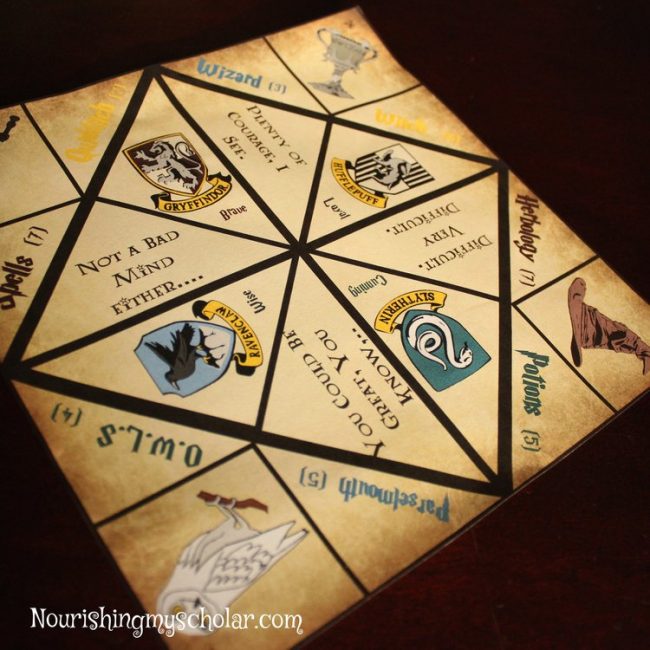 With your pattern facing down, fold all four of the corners into the center. Be sure to watch your lines and try to make it as even as possible. 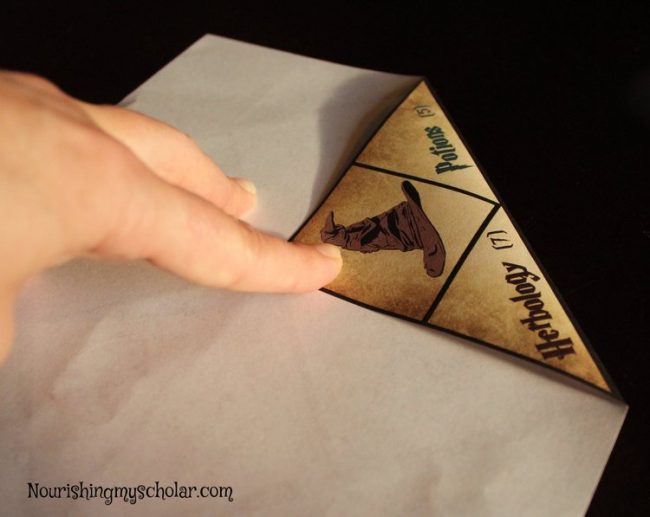 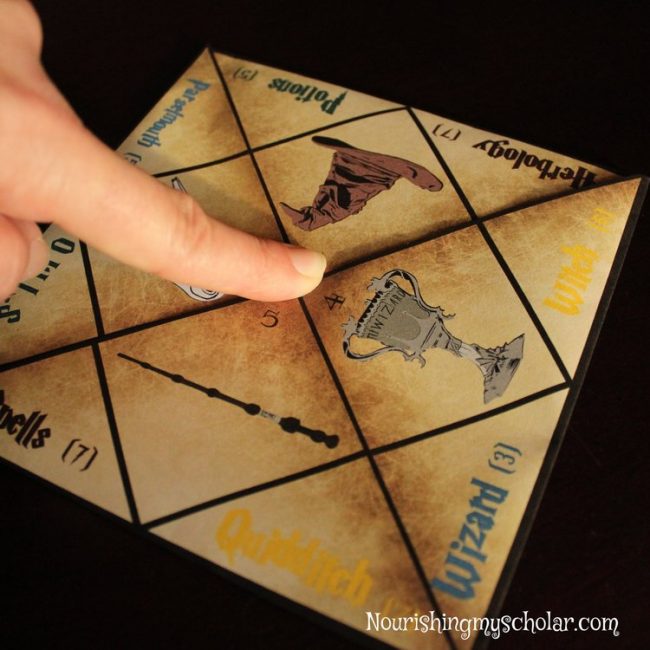 Turn your pattern over so that the Hogwarts Houses are facing up. Fold the corners into the center again to create a smaller square. Be sure to crease your edges. 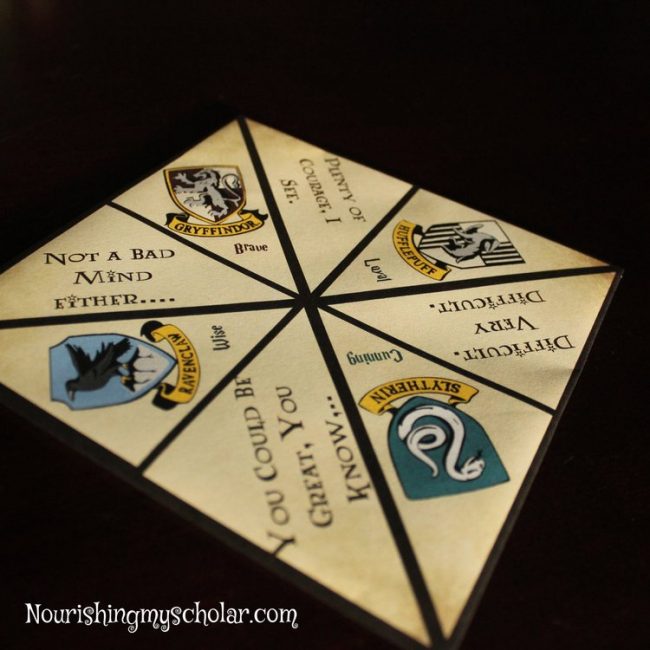 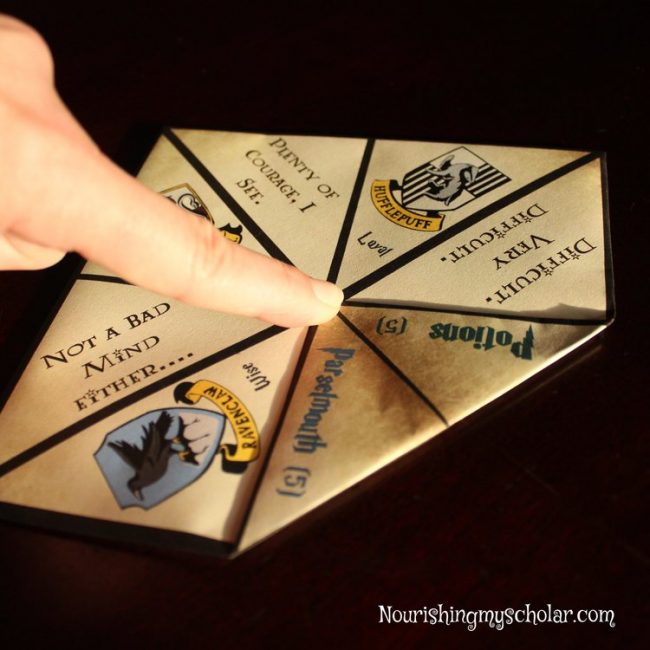 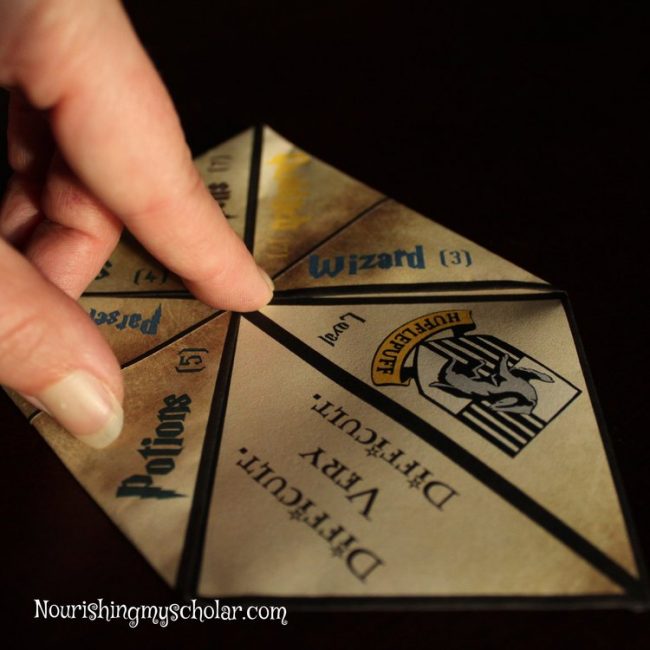 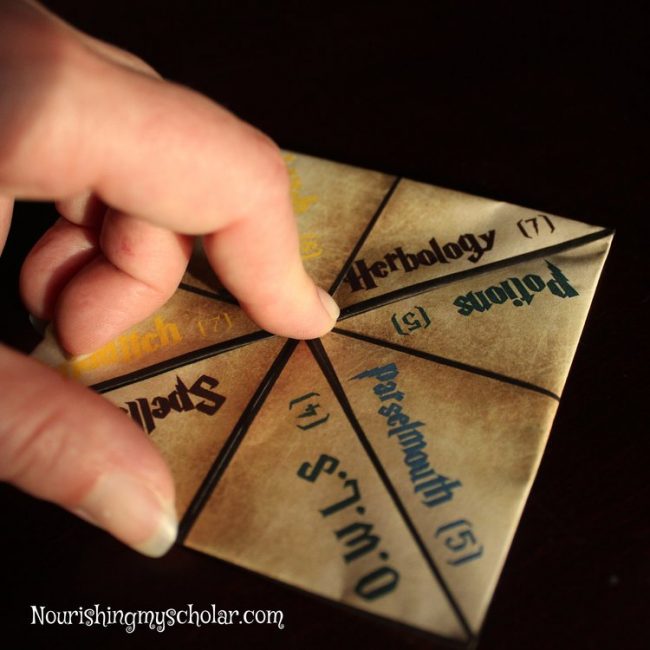 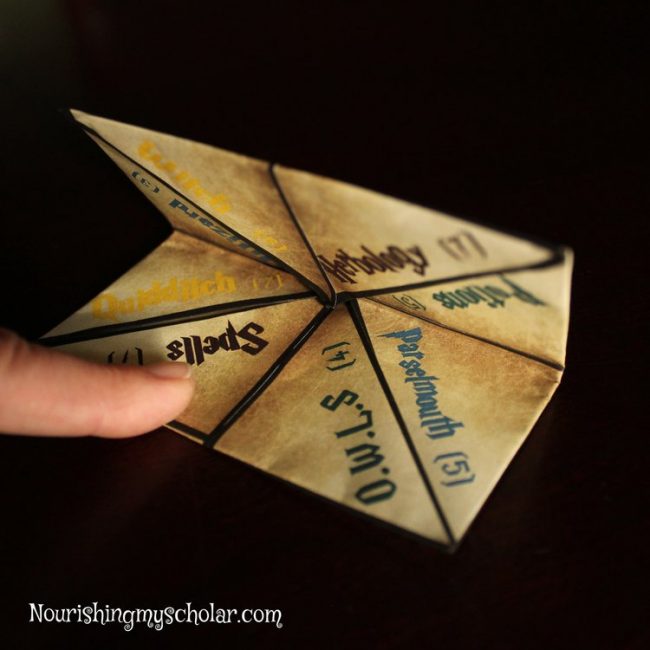 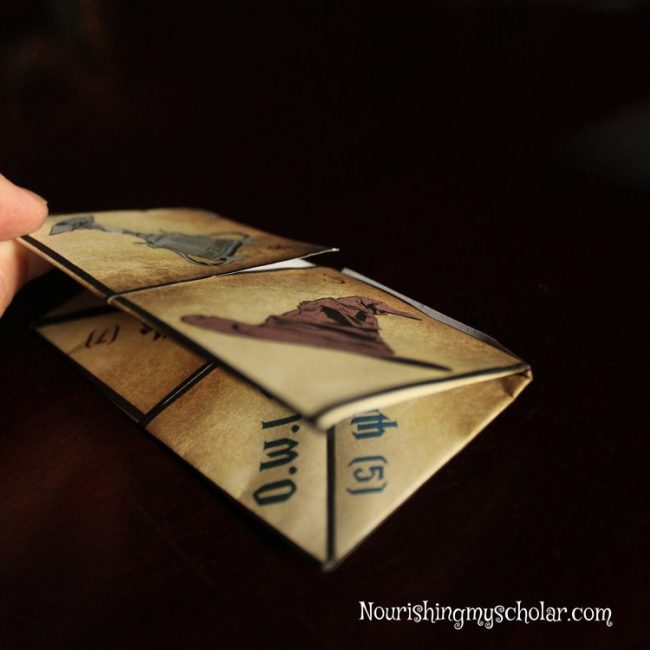 Then, place your fingers into the bottom of the paper and pop it up to make four cone shapes. The “Sorting Hat” is ready to start sorting! 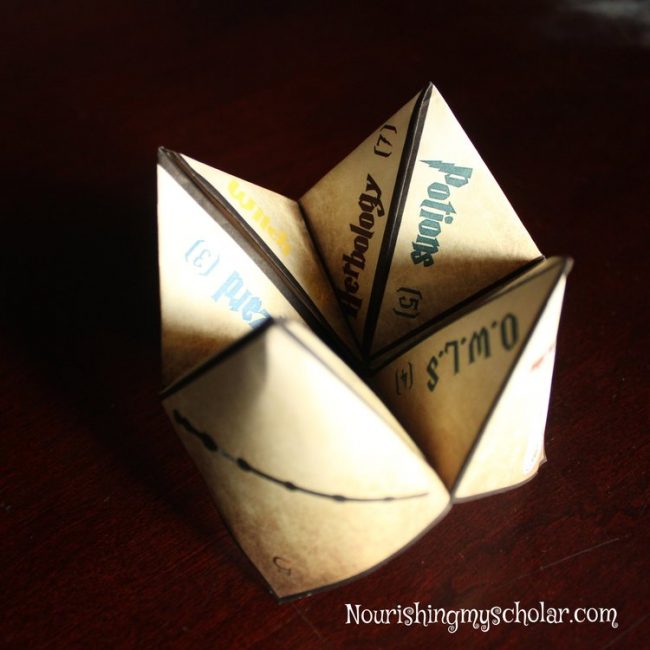 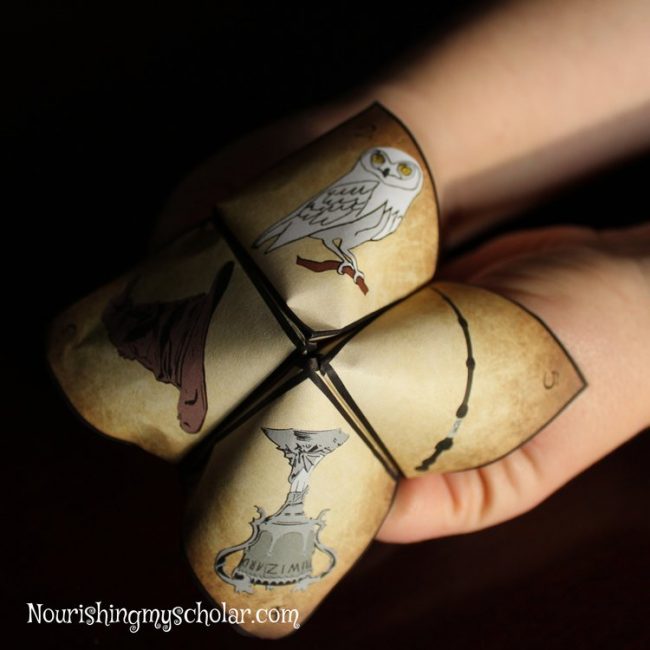 Hold your Harry Potter Sorting Hat Origami Fortune Teller with two hands. Place your thumbs and pointer fingers inside the cone shapes. Let the person who is being sorted choose one of the images on the top. Either the Wizard Cup, Wand, Owl, or Sorting Hat. 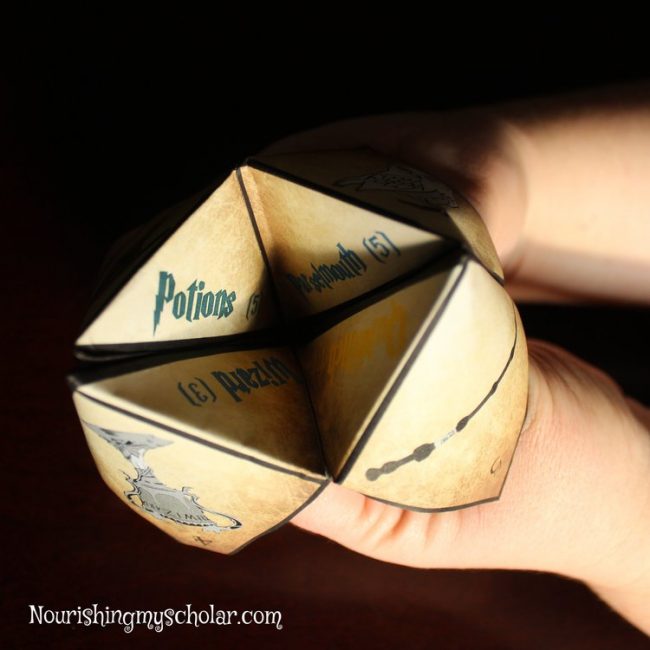 Repeat this process for a total of 3 times. 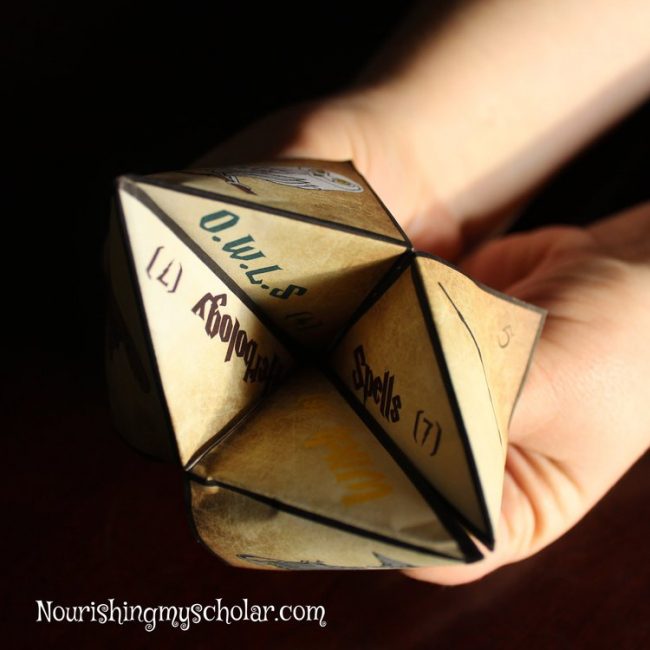 On the fourth word selection, instead of counting out the numbers again, you will open the flap and read the directions under that word. Four of the words hold a Hogwarts House icon under them. If you get one of these, then you have been officially sorted into your house! The other four slots are filled with Sorting Hat sayings. such as, “Difficult. Very Difficult.” This means you need to start again! 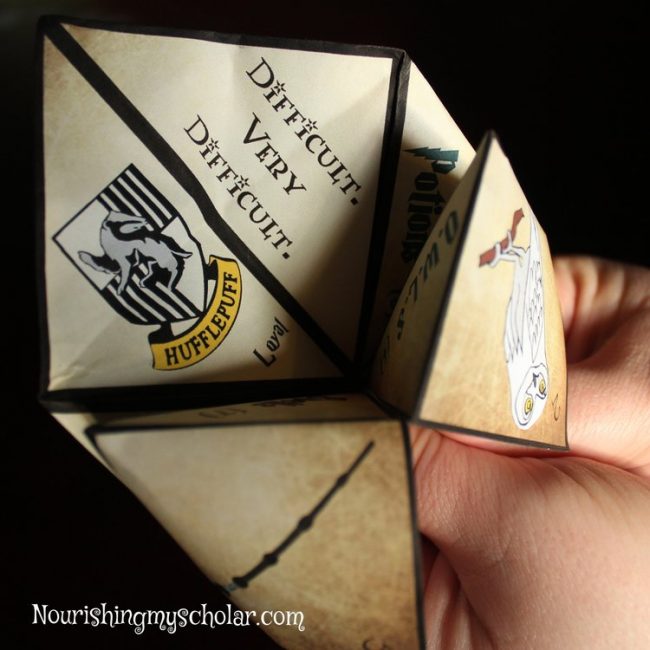 Keep playing until everyone is sorted into their Hogwarts Houses! 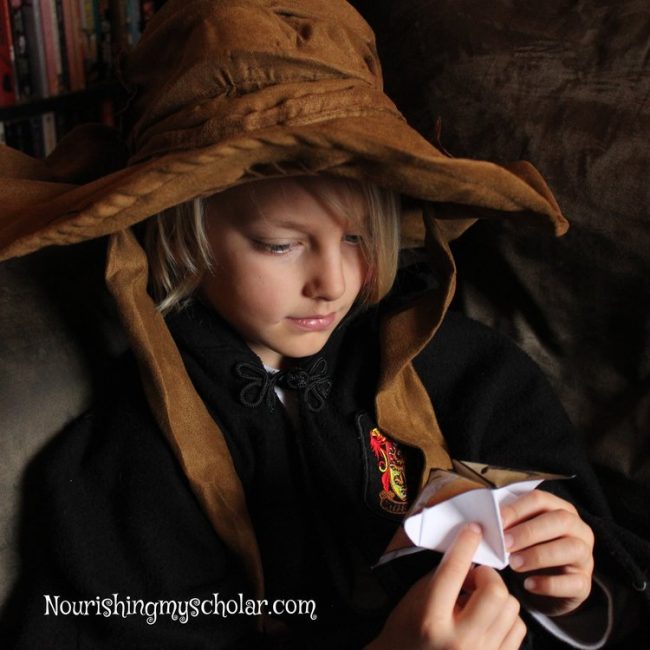 These courses are the subjects commonly referred to as language arts, science, history, art, and music. You can read our full review here: 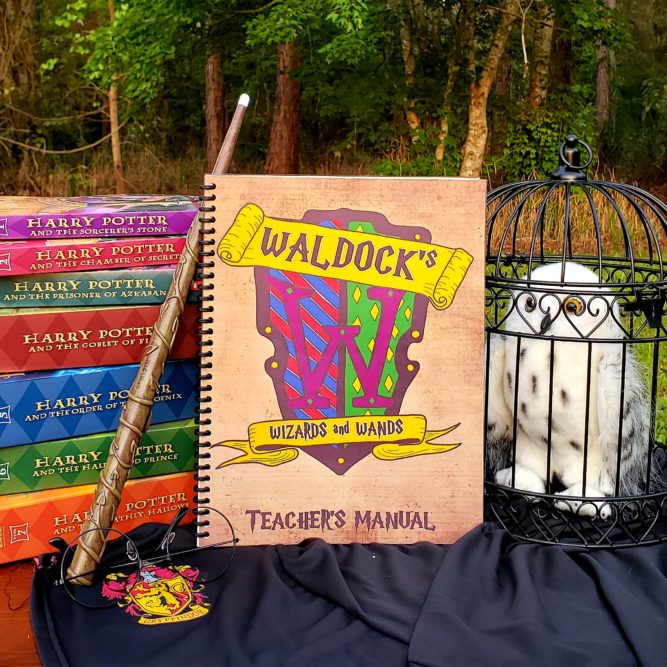 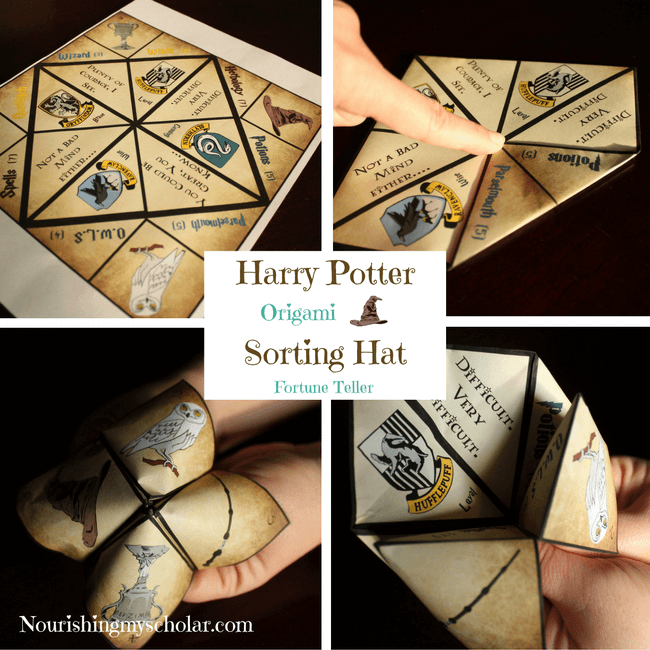 You may also enjoy these Harry Potter-themed games and books! 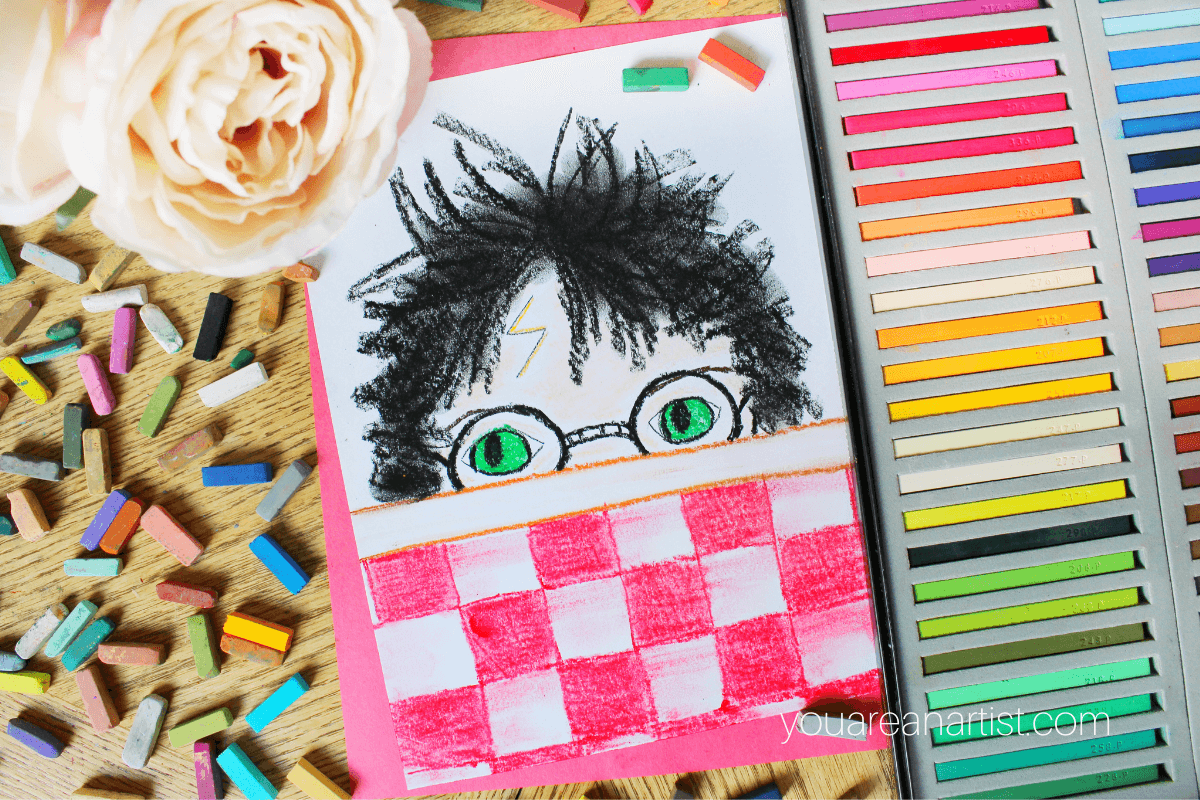 You may be interested in these other Harry Potter related posts:

We use cookies to ensure that we give you the best experience on our website. If you continue to use this site we will assume that you are happy with it.OkNoRead more
Revoke Cookies