My son has been a dinosaur fanatic ever since he was 3 years old. This passion has spilled over into everyday life for us. What started out as a little boys interest has led to many museum visits, documentaries, puzzles, science experiments, internet searches, geography, mapping skills, and paleontology summer camps. As a family, we have all learned more about the Permian, Jurassic, Triassic, Cretaceous, and Pliocene time periods than we ever dreamed we would! Dinosaur means “Terrible Lizard” which is misleading because dinosaurs were not lizards at all. They are a separate group of reptiles. Additionally, many prehistoric animals, including pterosaurs, plesiosauria and dimetrodon  are not classified as dinosaurs….yep, more than I ever thought I would know. 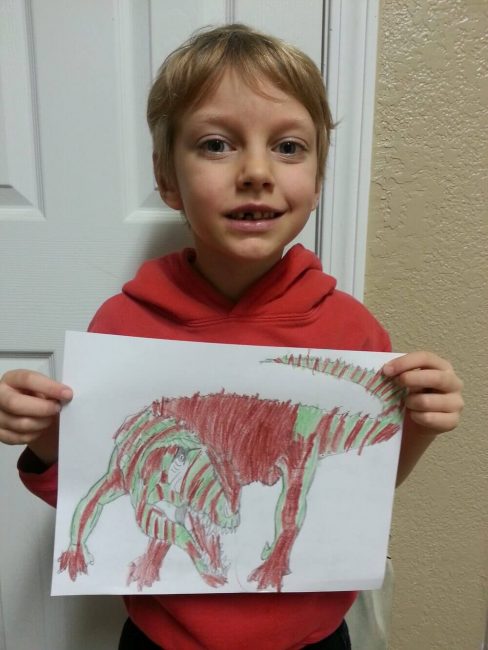 My husband and I have encouraged Gabriel to delve as deeply into any subject as he wants. We believe that whatever Gabriel finds of interest, he should find out as much about that subject as possible. With that, Gabriel decided to create his own “Dinosaur Field Guide” though it contains creatures that are not dinosaurs and from different time periods. It would probably be better named “The Prehistoric Field Guide”. He asked me if I would help him with this project by looking up videos, facts and pictures about the creatures he had chosen. Of course I said yes! Gabriel always chooses whatever creature he wants to research and through research he gets ideas for his next subject. For example, by looking up Dimetradon, he learned about Synapsids and so discovered many other genus such as Moschops. This also led him to discover the Scientific Classification. 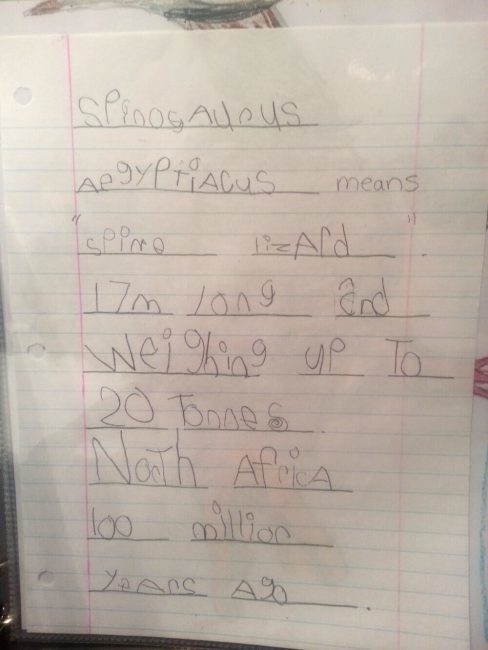 When looking up the prehistoric creatures, Gabriel discovers where they are found in the world and what time periods they lived in. I start him off by giving him the Latitiude and Longitude of the location where the fossils can be found. Once he finds the location, we talk about that country. Thus a discussion of what their world looked like verses the world we live in today. In the case of Tyrannosaurus Rex, he learned that what is now the western part of the United States was once Laramidia, an island continent. He also learned that the Western Interior Seaway split the continent of North America in two. One side being Laramidia and the other called Appalachia.

We always use our world map to mark where in the world a dinosaur fossil is found. We do this so that Gabriel will know where he wants to go on his fossil digs when he is a paleontologist. He currently wants to visit North Africa, Montana, Utah, Mongolia, Madagascar, and Patagonia. As he was researching the Carnotaurus of Patagonia in South America, he wanted to know why it was called Patagonia. This led into the discovery of Patagonia by Ferdinand Magellan.

Before the Dinosaur Field Guide project, Gabriel loathed writing. I would still have him do some copy work but he really didn’t enjoy it. The Dinosaur Field Guide project has replaced his original copy work. I find this very important because now he is writing about subjects and ideas that matter to him. His reading and writing has greatly improved since beginning this project.  He has even asked me about cursive writing in the past week. He wants to sign his name the way a real Paleontologist would and I think it is awesome! 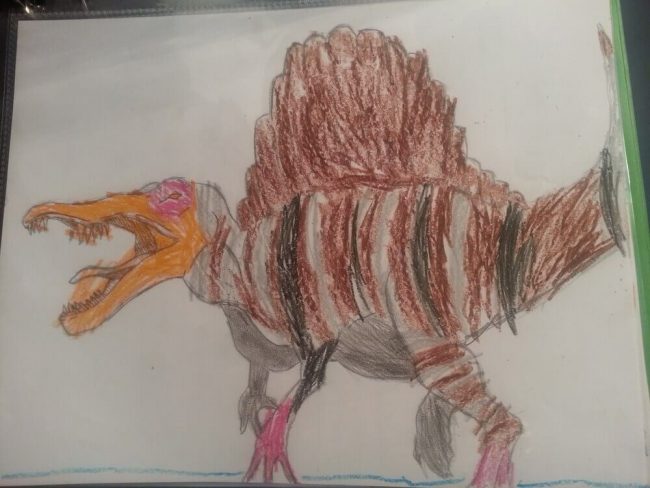 We incorporate art into the Dinosaur Field Guide by having Papa or myself draw up the creature that Gabriel has researched. Then Gabriel colors the picture with markers, paints, or crayons based on evidence he has found to support any color or feathers that may have existed. Many times we will also make models out of clay or legos. This is how Gabriel discovered the difference between bipedal and quadrupedal. While dinosaurs were ancestrally bipedal, he learned, that many groups included quadrupedal species, and some were able to shift between the two. By the way, humans are bipedal.

Gabriels Dinosaur Field Guide currently contains 16 different species of prehistoric creatures. Based on our experience of interest led learning, I highly recommend it. Not every child or family is interested in dinosaurs, nor should they be. Every child is different. Some children may be interested in art, biology, writing, or sharks. If you can find that which sparks your childs imagination, creativity and desires then you have hit the educational jack pot!