We love to play games in our home. We also love creating and designing…creating new structures, creating new ideas for vehicles or armor for pretend play. Our 8 year old son is always creating something new. My husband and I always refer to him as our mad scientist that is up till the wee hours of the morning creating something. 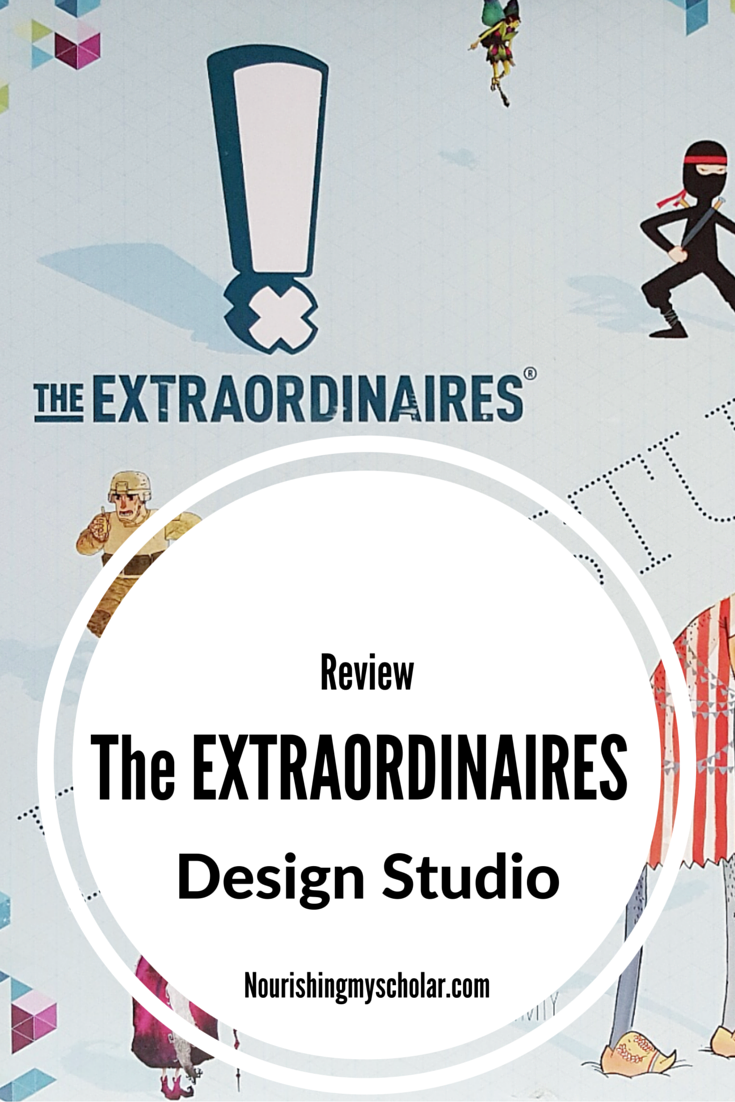 Disclaimer: I received The Extraordinaires Design Studio in exchange for an honest review of the product. I was not required to right a positive review. As always, all opinions are my own.

The Extraordinaires Design Studio comes from the creators of Rory’s Story Cubes, Anita Murphy and Rory O’Connor. They were approached by teachers in the UK who were looking for an accessible way to teach STEM in the classroom. Since its release in 2013 it has been used in classrooms, in homeschool and unschool settings and also as a leisure time activity. Now, we have used Rory’s Story Cubes for years. They have been a great way to incorporate story telling into our homeschooling/unschooling adventures. So when the creators of Rory’s Story Cubes reached out to me asking me if I wanted to review The Extaordinaires Design Studio, I leaped at the opportunity. 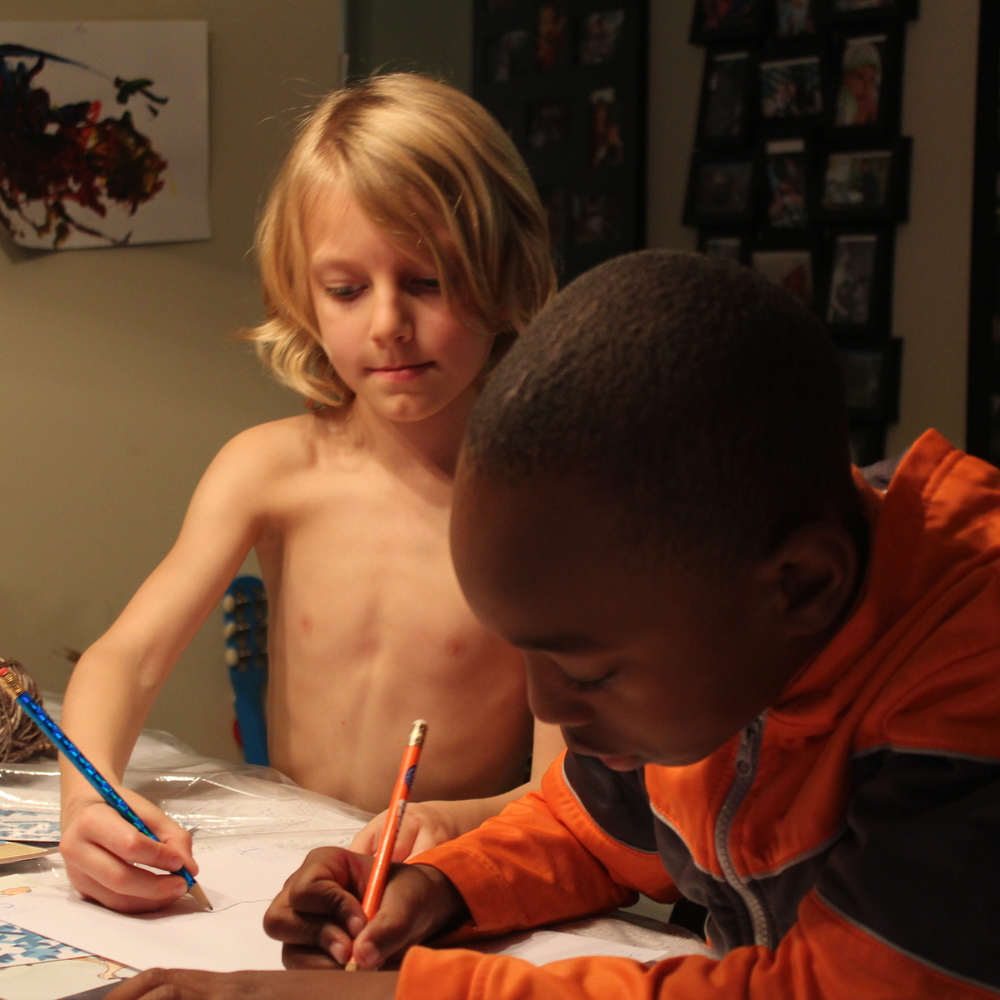 What is The Extraordinaires Design Studio?

The Extraordinaires Design Studio teaches Design Thinking through the process of research, design, and improvement. The Extraordinaires are a group of characters with extraordinary needs, within the game they become the clients, with the child playing the game becoming the designer.

The child picks a “character card” & a “project card”, which details a project for the child to invent. A “think card” has some helpful suggestions of elements of the design to consider. 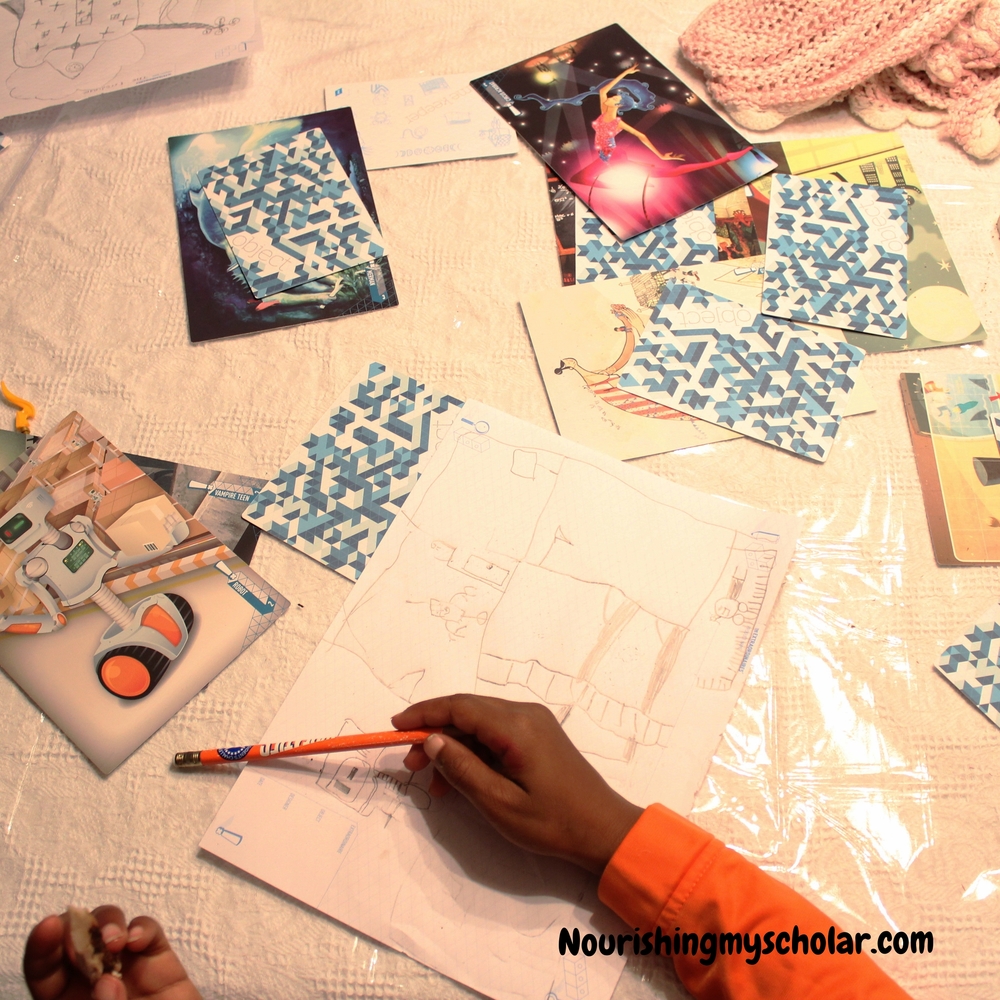 How are we using The Extraordinaires Design Studio?

We invited several of our son and daughters friends over to play in teams. This was an excellent team building exercise as everyone helped their team to brainstorm ideas for their new inventions as well as naming their designs. It also brought out the artistic talents in several children as they had to draw their ideas on the drawing paper provided. After each team has finished creating and naming their design we then went around the room allowing each team to present their creation to the rest of the teams. They explain what their design is and how it works along with any unique features they added. This is becoming a weekly activity as all of the children really enjoy it and ask to play the game. 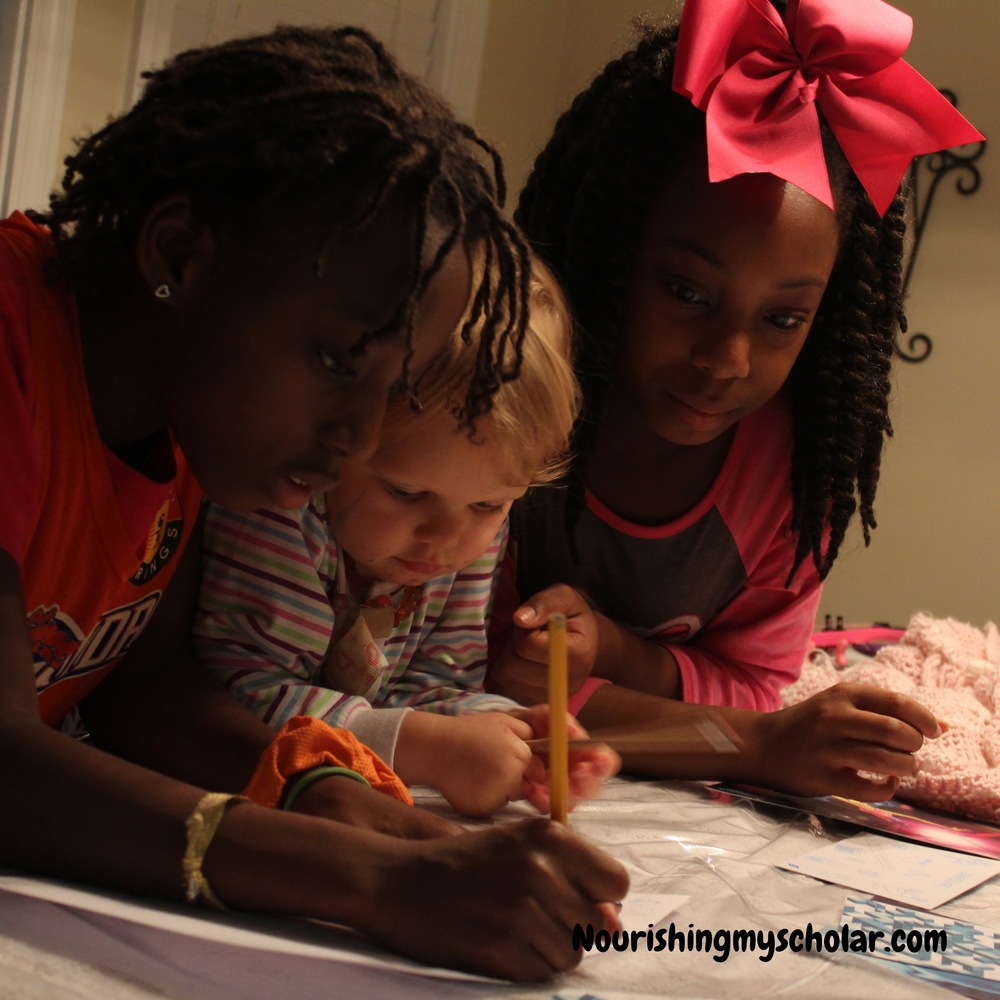 One group came up with the Clean Waterfall 2000 which was created for a fairy client that needed an object to clean herself with, that also combined natural elements. 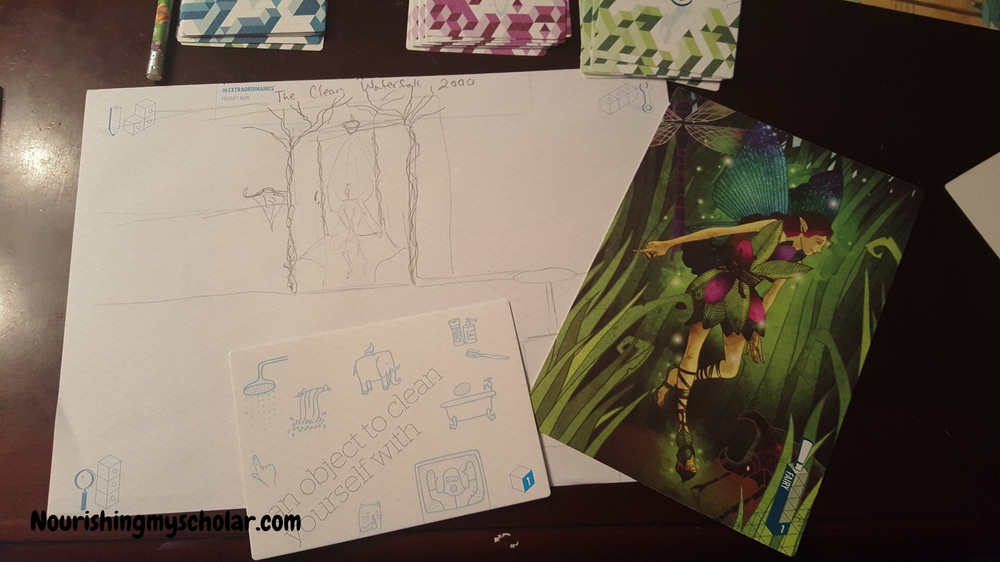 Another group came up with the Trash-bag Time Keeper. Similar to a Tardis as it’s bigger on the inside, but for the army general in your life, HA! 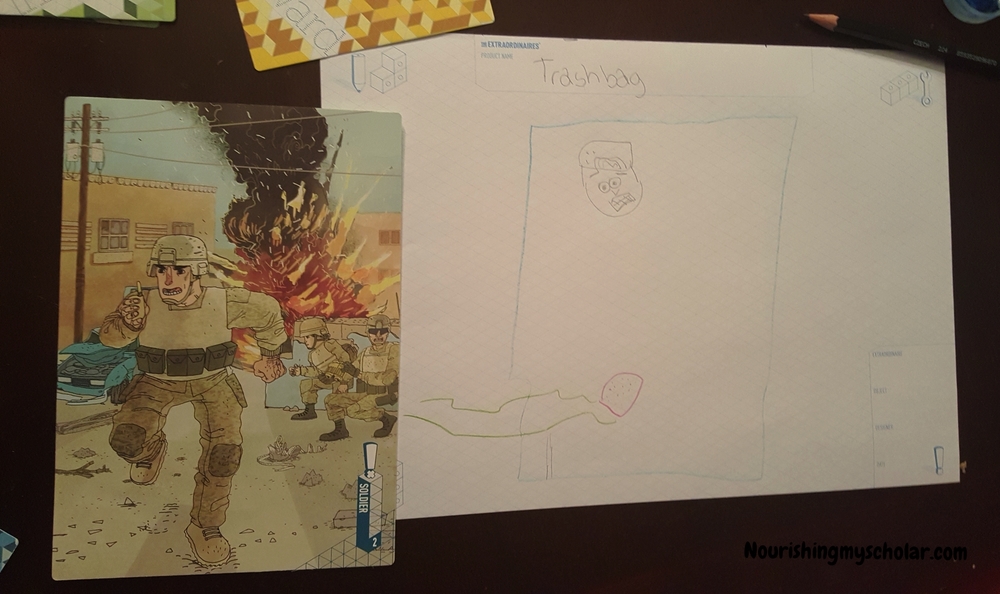 The children have on separate occasions created a Swiss-Army Knife for Fairies in the Kitchen and a Rechargeable Bunk-Bed for your family robot. In the words of our 8 year old son,

“This is a great game to get you thinking on how to shape and design new creations. My first time playing The Extrordinaires Design Studio we designed a project called The Trashbag Time Keeper that has a sling shot that allows you to go back in time, has a bed for napping while you travel, and it also has a clock for letting you know the current time. The second project we did was a Robot bed and my friend actually drew the Robot while I worked on the bed project. I look forward to playing The Extraordinaires Design Studio again next week.”

In the box for The Extraordinaires Design Studio, you receive character cards, project cards, think cards, a pen, a drawing pad of paper, and a plastic case to keep all of the different elements together. 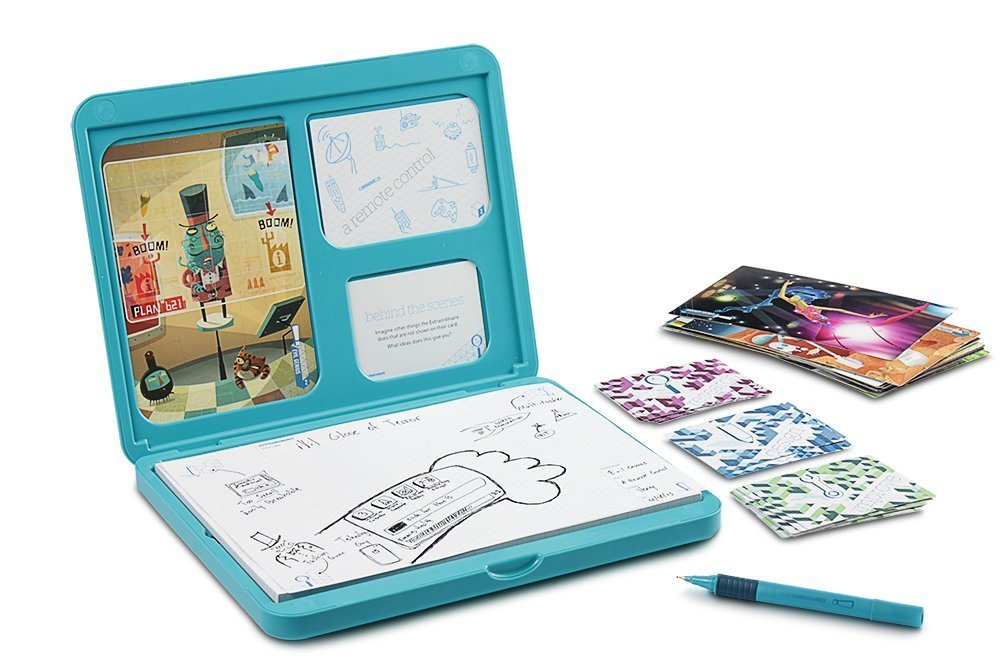 The Extraordinaires Design Studio is a fantastic way to inspire children to problem solve, design, and create their own fun & unique inventions. It begins the thought processes that who knows…may lead to all of these designs becoming a reality in the future.