Gabriel and I both woke up at 8am. He went into his “LEGO Room” to build while I made breakfast. Around 9:30am my toddler, Jade, was up and ready to get the day going. When I asked them what we should do first they immediately yelled “Go Outside!” Okey Dokey, outside it will be. We headed for our favorite trail that circles around our apartment complex. It is awesome, because you feel like you are really in the forest! We only got about 200 yards into the trail when we spotted 3 deer in our path! The kids were supper excited. Gabriel wanted to get closer and observe them, like any good scientist would. He tried but they would only let get about 30ft from them before they would prance in the opposite direction. Jade kept whispering, “Reindeer Momma, see the reindeer!” I snapped a couple of pictures but they are so well camouflaged that you cannot see them! Only occasionally would you see the flick of the white tail. 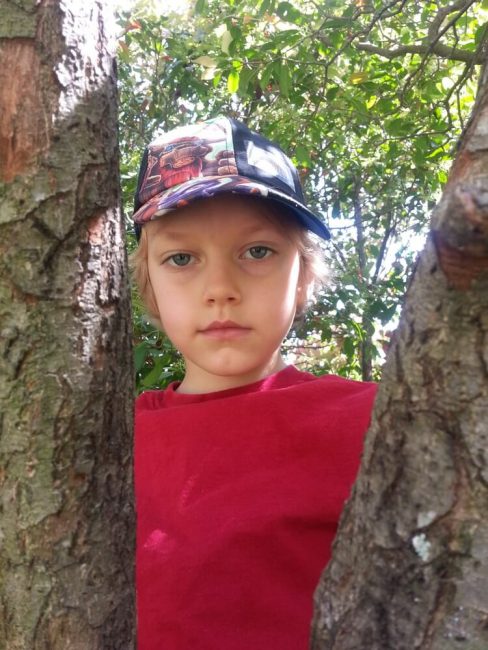 We observed the deer for about 15 minutes before they finally got spooked by Jades never ending “Reindeer” rant and ran off.  After that we headed through the trail to our favorite clearing. This green space holds Gabriel’s favorite climbing tree and Jades favorite “Crocodile infested” creek. I enjoy it for the menagerie of birds that seem to be drawn to this open area. I’ve even downloaded an app on my phone to help me figure out what species they are. It’s called the North American Birds Sounds and I really like how it plays the songs of the different bird species. Because, sometimes I can’t see the bird, I just hear its song.

When my son started climbing “His Tree,”  he immediately realized it had other occupants! A pair of cardinals had built a nest in it, which at first he thought was rather rude, being that he claims the tree as his and they didn’t asked him if it was OK to build a nest in it! I asked him, “What would a scientist do?” That seemed to do the trick. Now he was on a mission, to observe and document this nest in his favorite tree! He plans to come back daily to observe and document any new developments.

Jade played in the mostly dry creek looking for crocodiles. Occasionally she would yell, “Crocydiwals Momma, Crocydiwals!” I would go over and look and it would be a rock or a stick. But I would humor her and say, “Whoa, look at that Crocodile!” Gabriel was still trying to get a better look at the nest. He even took my phone to try and get a picture of it. After a while Jade came to me to announce she was tired and ready to go home. Gabriel on the other hand said, “Momma, I’m observing this very important find!” Ok, I say, a few more minutes. Suddenly he yells out, “Momma I’ve found a bone in this tree! This is another important find!” Wait, what?

Ummmm, that bone looks like an old chicken leg a cat has been chewing! “Gabriel, please wash your hands when we get home. To which he replied, “But Momma, I’m a scientist!!!!” Really? I had no idea scientist didn’t wash their hands? The excuses little boys will use to not use soap and water! 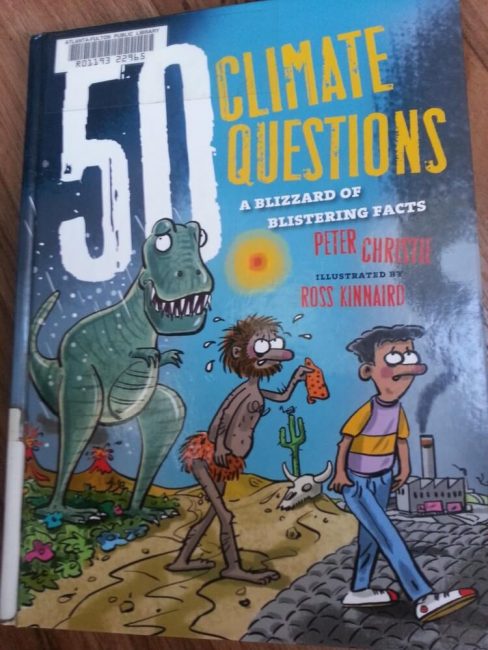 We headed back home so we could wash our hands…thoroughly, eat lunch and let Jade take a nap. After which Gabriel very enthusiastically asked if he could add and divide up chocolate chips! Umm, Yes! He poured out over 100 chips. Math is so much better with chocolate!

He then asked me if I would snuggle into a pillow fort with him and read his current favorite book, 50 Climate Questions. This is a really neat book! It covers everything from the dinosaurs all the way up to modern times and how climate has effected changes throughout the eons. Now reading this book also brings up other subjects that my little scientist then wants to investigate, such as: Natufian Culture, Homo Floresiensis, Leif Erikson, Sir Frances Drake, the Lost Roanoke Colony, and Hernan Cortes! So, once those topics were brought up, he wanted to watch documentaries on them all. I pulled up videos on each subject for him on the computer while he worked on a new building for his LEGO city. I then went and got Jade up from her nap. 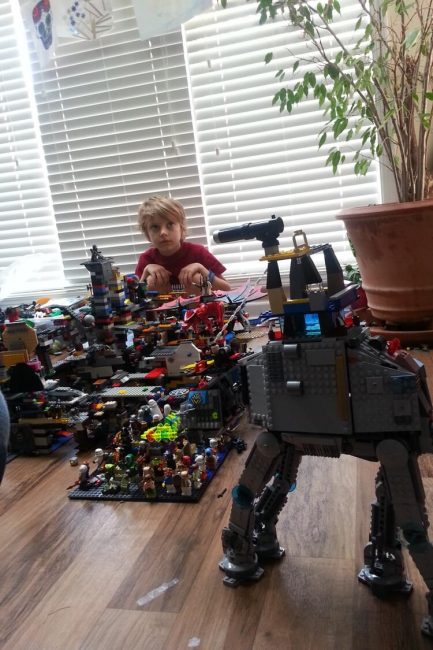 For the hour or so that Gabriel was watching videos, I snuggled with my girl and read her book “What Makes a Rainbow” over, and over, and over,  and over….are you sensing a theme yet? Yes, I read her book out loud about 8 times. I am not exaggerating! But the snuggles made it all worth it! Then we colored ponies and dinosaurs at the kitchen table.

Once Gabriel’s videos were finished and his curiosity for those subjects was satisfied, I asked him to tell me a little bit about each subject. Well, turns out the Natufian Culture was the first to farm grain, the Homo Floresiensis was a real life Hobbit, Leif Erikson was the first European to discover North America…not Christopher Columbus, Sir Frances Drake was a pirate, slave trader and friends with Queen Elizabeth I, The Lost Roanoke Colony was off the coast of North Carolina, and Hernan Cortes was a Spaniard that conquered the Aztecs. The coolest part was learning how climate played a role in each of these subjects! 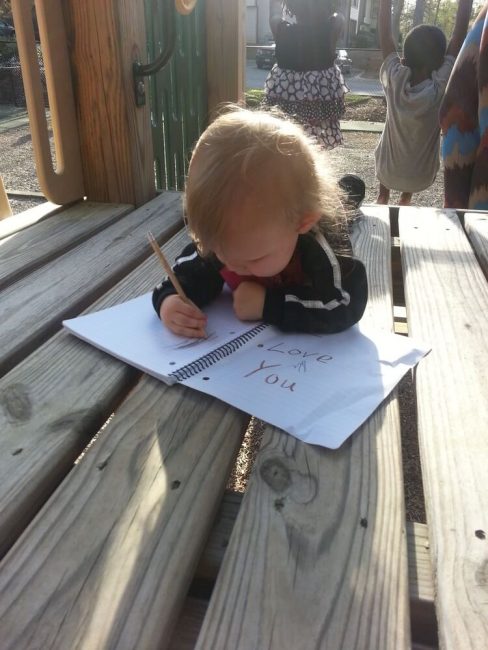 We went to the playground around 5:30pm. Jade insisted on bringing her notebook and pencil. She said, “I need draw shapes, Momma!” So she drew “shapes” which were really just squiggly lines all over her papers. She chased “Brudar” around a little while holding her notebook and pencil. Then she got caught up in the songs of the birds. When all of the kids at the playground started playing a game of tag, Jade tried to keep up. But her little legs were so much smaller than everyone else, that she really had no chance at all. So she resorted to just yelling, “Brudar!!!!” every 10 seconds across the playground.  In less than 30 minutes my children were exhausted! When I told Jade it was time to go home, she shooshed me with her finger and said, “Hush Momma! Hear dat bird?” Yes I heard the cardinal…I wonder if it’s the same one from Gabriel’s tree? 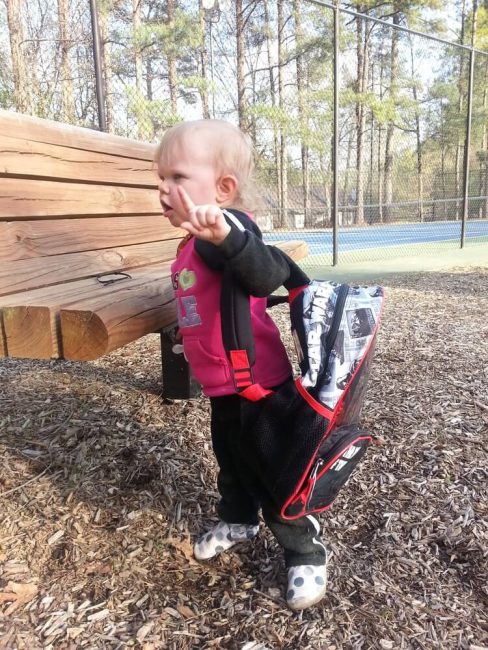 Once the cardinal hushed, we headed inside for dinner and baths. Baths lasted about 30 minutes. The kids always enjoy playing in the water with their toys. Gabriel likes to wear his swim goggles and play pretend.

It was 7pm, by the time I tucked them both into bed with their blankies, and began reading 50 Climate Questions again. Yes, that is the book they wanted to hear before bed! Both of them were excited to hear more of this book. So, I read several chapters out loud. Papa came home in the middle of my reading so he curled up in the bed with us and listened to the book. 8pm and they both could barely keep their eyes open. Papa sang them a song and then out went the lights. Until tomorrow, when the adventure begins again!