Taekwondo is a Korean martial art that combines combat and self-defense techniques. In Korean, tae means “to stomp” or “to break with the foot”; kwon means “to strike or break with fist”; and do means “way of life.” So, loosely translated, Taekwondo means “the way of the foot and hand.” 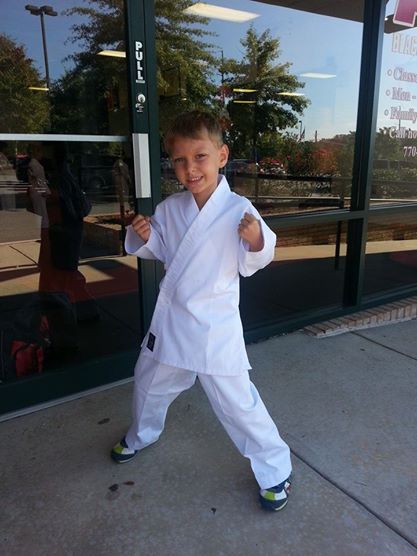 My husband and I started looking into martial arts for our son, Gabriel, back in September. We knew he needed an extracurricular activity that would focus on positive reinforcement, positive attitude, mental focus, strength, and help him with his leadership skills. You see, Gabriel lacked confidence and always dwelt on the negative. We found everything Gabriel needed in the American Taekwondo Association (ATA) Karate Atlanta.

Gabriel loved the idea of Taekwondo. He thought he was going to walk in and immediately begin breaking boards and sparring with weapons. Little did he realize the work and dedication that goes into a martial art form. According to ATA each belt has a symbolic meaning that compares the students growth in Taekwondo to the growth of a pine tree. 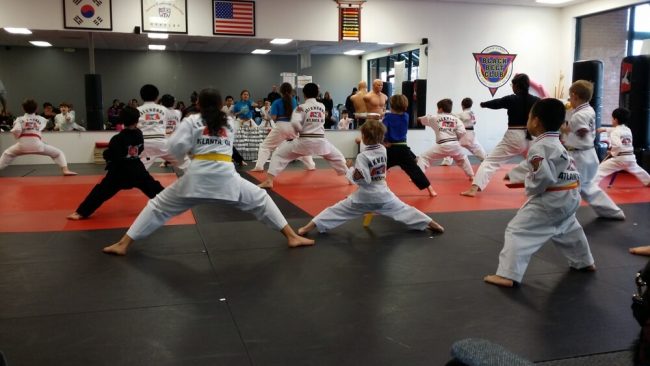 It was three classes before he received his white belt, which in itself means “Pure and without the knowledge of Songham Taekwondo. As with the Pine Tree, the seed must now be planted and nourished to develop strong roots.” Once he received that belt we asked him if he wanted to continue. You see, we will not force Gabriel to continue in something that he does not want to. He will always make the choice. Yet, he was determined to reach the next belt and he asked to join the leadership program.

After eight weeks Gabriel tested for his Orange Belt, which means “The sun is beginning to rise. As with the morning’s dawn, only the beauty of the sunrise is seen rather than the immense power.” He performed excellently and achieved his orange belt. Again, we asked him if he wished to continue. Again he said yes. His confidence was growing exponentially as were his skills! Gabriels instructors were  phenomenal. They are so great in helping the kids uncover their inner greatness.  Weekly they give the kids homework that deals with positive thinking and techniques. Our son was blossoming. Gabriel could now do splits, squats, burpes, jumps, kicks, punches, pushups, basic self defense, and basic swordsmanship. He was growing stronger physically and mentally. He still had his bouts of negativity, but overall we have seen a vast improvement…and he loved going to his classes.

Eight weeks later he tested for his Yellow Belt, which means “The seed is beginning to see the sunlight.” Again, he passed. He was working with the bow staff, which I think is secretly his favorite weapon. He was confidently leading his class in Songham 4 whenever his instructor asked him to. He could now break a small board and he was sparring with other students. He was and still is working towards becoming part of the schools Demo Team.

So, eight weeks later Gabriel tested for his Camouflage Belt which means; “The sapling is hidden amongst the taller pines and must now fight its way upwards.” He again, achieved his goal. We are amazed at the transformation we have witnessed in our son. He practices daily. He has more mental focus and understanding, and his ability to lead others was an untapped talent. Taekwondo has been a blessing in our lives and has helped our son tremendously. His goal now, is to achieve the blue belt within the next year. This means he has to achieve 2 other belts before he can test to become a blue belt. He knows everything gets harder with each belt he achieves. Yet he revels in the accomplishments.