On Saturday, we decided to visit an animal sanctuary called Noah’s Ark. We felt this would make a great family outing as well as an educational experience for us all. It is located just south of Atlanta, Georgia. I adore the mission behind this non profit sanctuary. They are dedicated to providing homes to injured, abused and orphaned animals, they provide a place of love for animals with special needs, and they are dedicated to bringing children and animals together in the hopes of a better tomorrow. More than 1,500 exotic and domestic animals call Noah’s Ark home. What’s not to love about that? 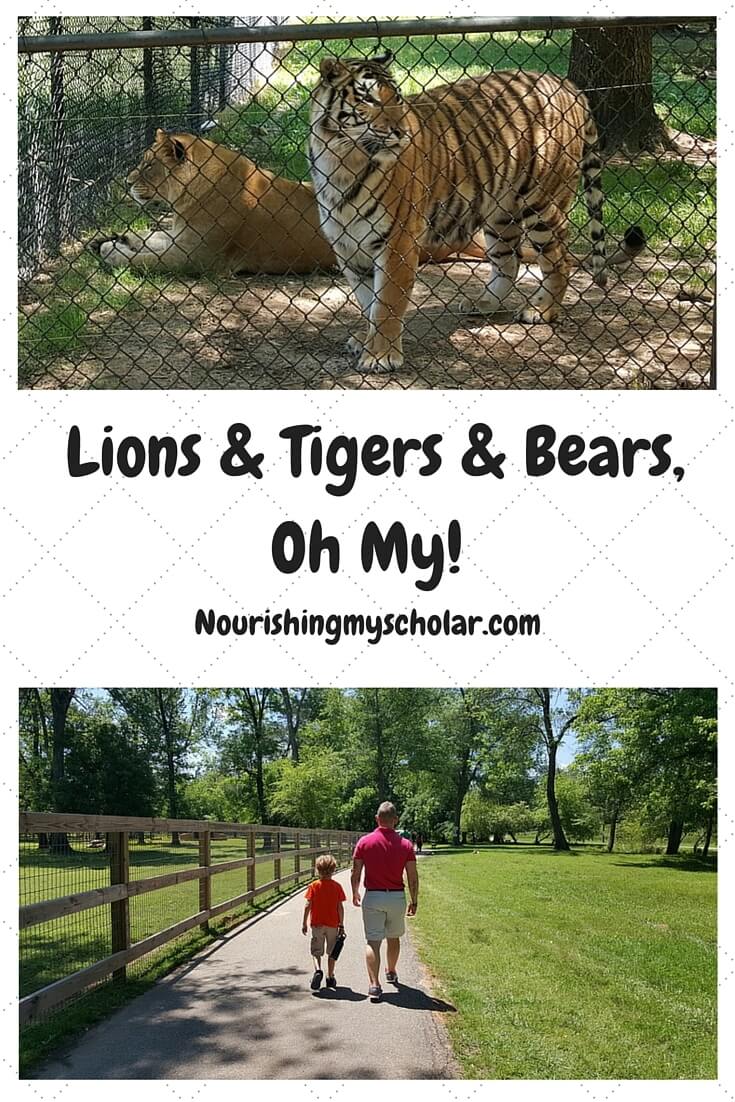 As soon as we arrived, we realized we had a monkey on our hands! Yep! You guessed correctly, our daughter Jade was already climbing on the outdoor furniture! After our climbing fiasco we signed in and met a few animals with special needs. It was so lovely to pet these wonderful creatures. We loved how the peacocks, ducks, and geese were roaming freely along the grounds…except for the few times Jade decided she wanted to chase/run with them. She was full of mischief! 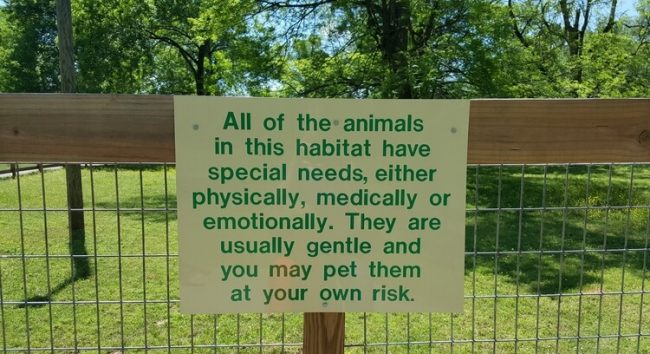 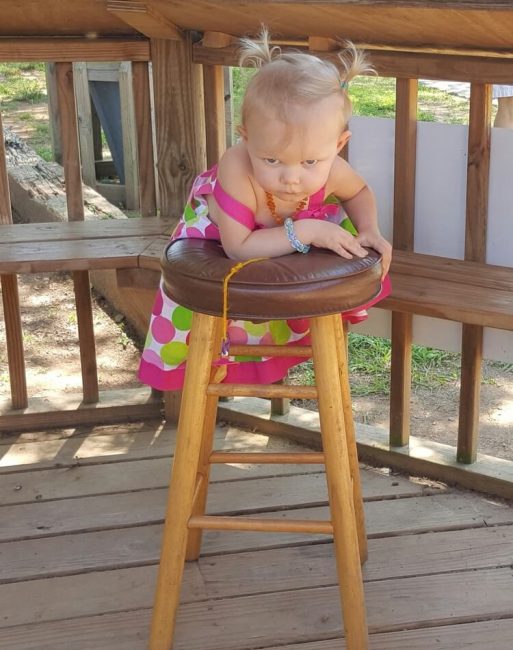 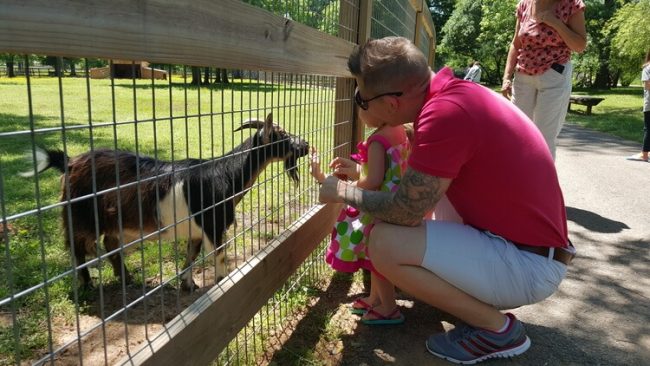 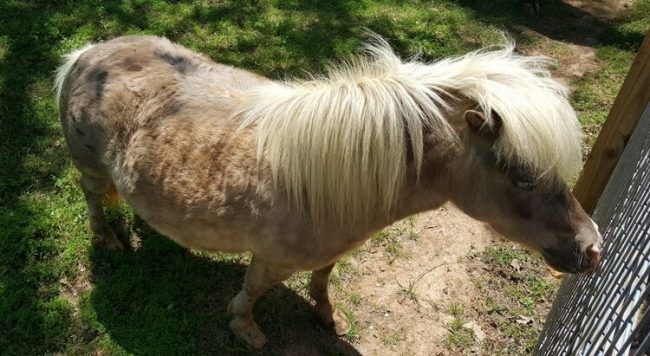 We headed along the path but got side tracked by a hole in the base of a tree. We must investigate these things, you know. We were surprised to find an old nest complete with feathers and a few egg shells! This was such a great find! 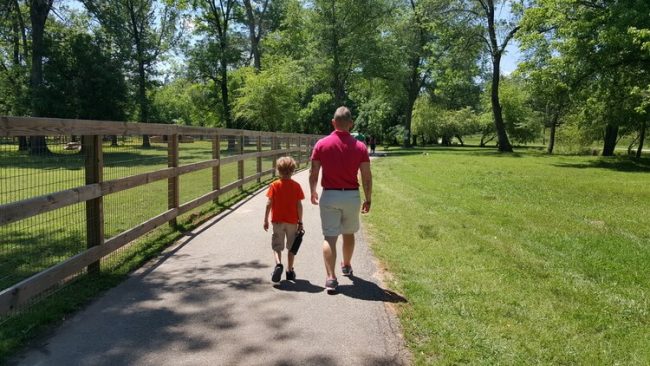 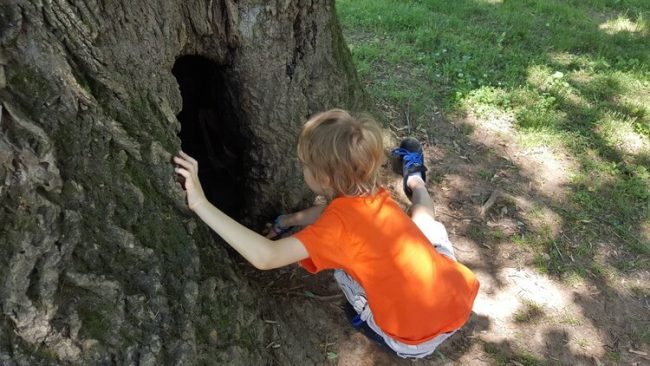 We then came upon Sheila & Suki the Bengal Tigers. It is sad, to me, to think of animals, like Sheila & Suki, living in cramped conditions their whole lives and then retiring and possibly having nowhere to go. Thankfully they both have plenty of space to stretch and run. No petting aloud, obviously, with these majestic creatures. There was a double fence barrier between us and the big cats. 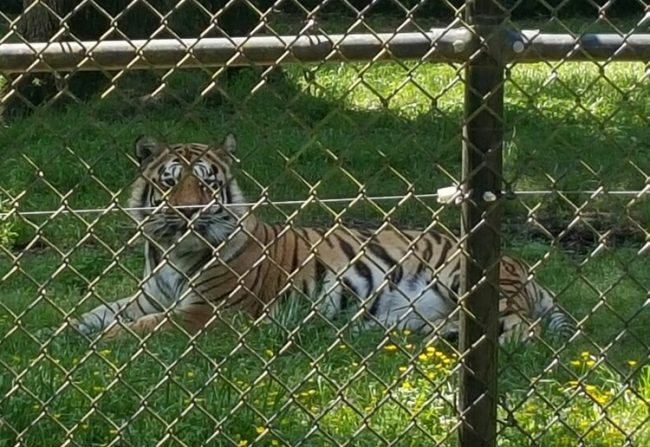 After Suki, we found the best thing in the world for a little boy…that’s right, a creek and a climbing tree! Across the creek was an enclosure for Parrots. Did you know that parrots are the third most popular pet in America? Unfortunately many people do not realize that they are long lived as well as loud, noisy and messy. Most of the birds at Noah’s Ark were either surrendered or rescued from deplorable conditions. They did not seem keen on letting me take their pictures and Jade felt they were to loud! So we moved on. 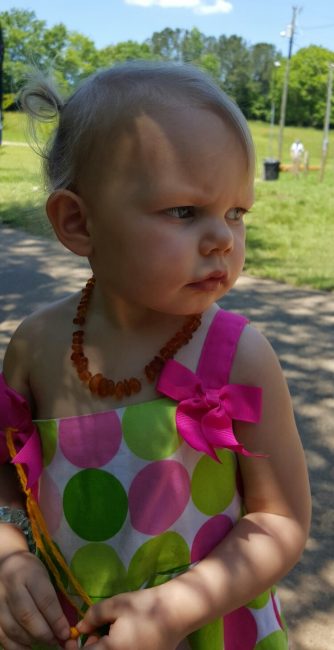 As we moved on we came to “BLT”…that is to say Baloo the Bear, Leo the Lion and Shere Khan the Tiger. Their story is heartbreakingly beautiful. Gabriel wanted to learn everything he could about these three individuals.

All three were discovered in the basement of a drug dealer as cubs 14 years ago. Noah’s Ark took them all in. They were all malnourished, and covered in parasites both inside and out. Baloo even had a an ingrown harness that was digging into his flesh that had to be surgically removed. His surgery was the only time the three animals have been separated. Apparently Leo and Shere Khan did not take kindly to having a missing member of their family. They were both very agitated and vocal until Baloo’s return. They have been together ever since and make the most unique family on earth! Gabriel and I found it super cool to watch BLT being fed…Jade on the other hand found drawing in the dirt with a stick far more stimulating! 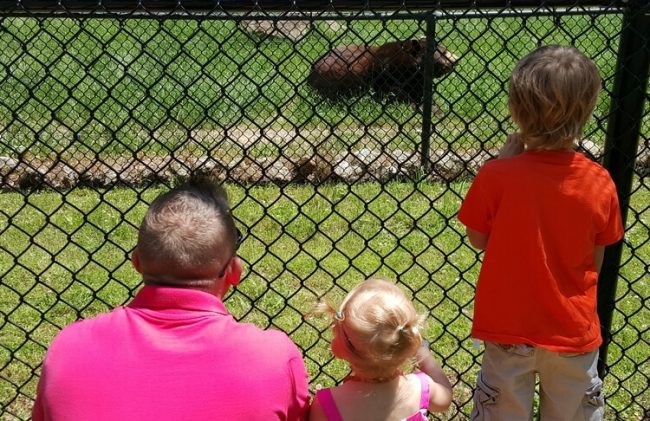 As we moved on another great tree was found…and then we discovered Zuri a White Bengal Tiger. She was sleeping on her den and thus I couldn’t get a good shot of her so I snapped a picture of the sign next to her enclosure. None of us realized that for every 1 white tiger born, there are 50 others that are “disposed” of. How tragic is that? We also learned that most white Tigers are born with disabilities including cleft palettes, scoliosis, mental impairment, club foot, defective organs, and visual impairment. Because of her inbreeding, Zuri herself has many physical ailments. Zuri was just days from being euthanized when she was rescued by Noah’s Ark. 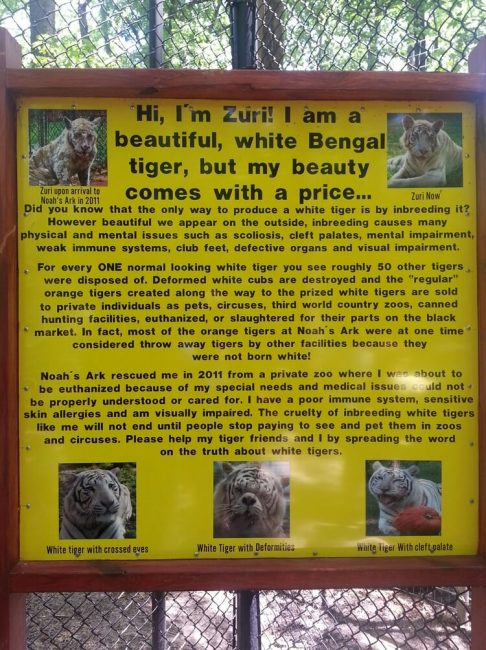 When we came to Tiger Lily the Bengal Tiger and Liberty the Lion. Both of these ladies were surrendered by their owners because they had become to much to handle. These two are best friends. Liberty is only two years old so she still has a few of her baby spots along her legs! After that Gabriel wanted to crawl through the grass like a big cat stalking his prey. 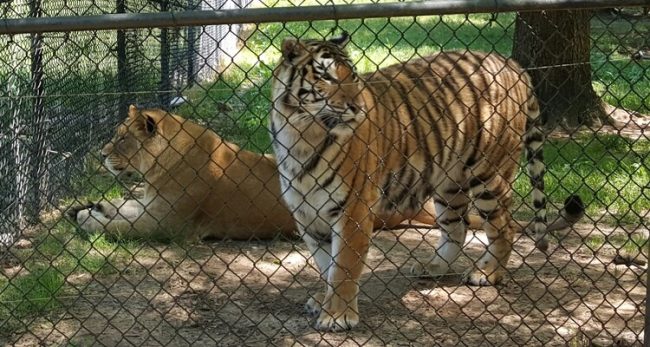 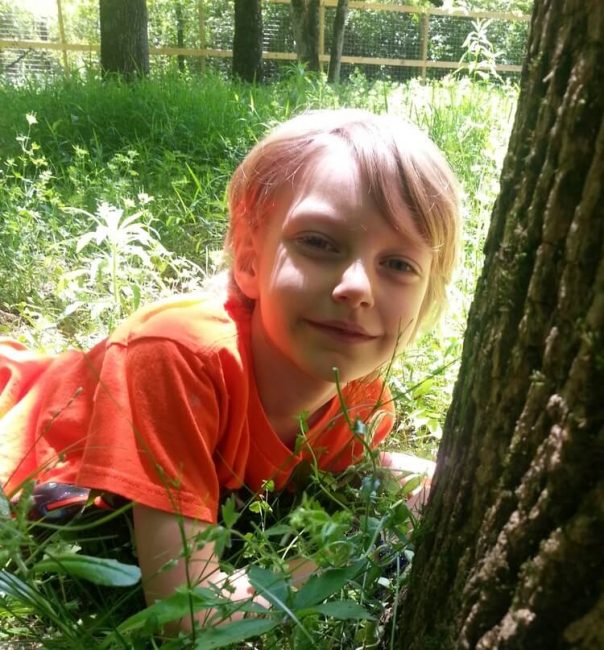 Farther along we got to see Gideon the 29 year old Syrian Brown Bear. Apparently Gideon is fond of graham crackers! We definitely noticed a theme with most of the animals here. They have endured some terrible conditions in the past. Gideon has arthritis from living on concrete for decades at another zoo! After watching this massive brown bear enjoy his treats, the kids found a fallen log to climb on. 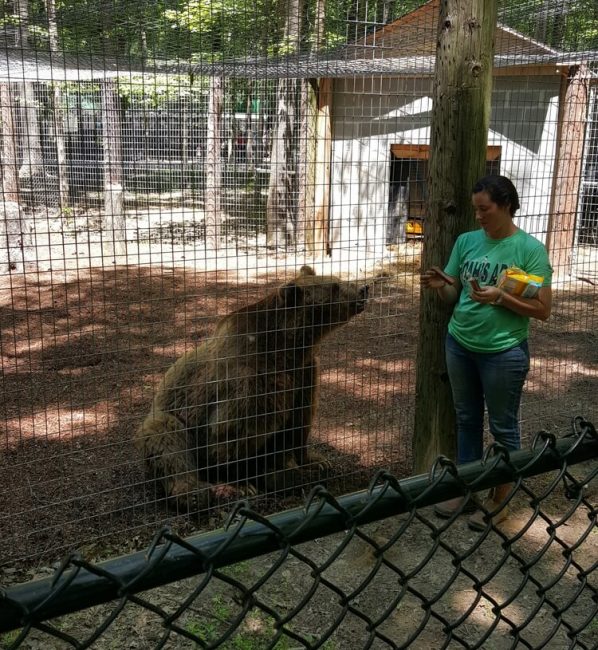 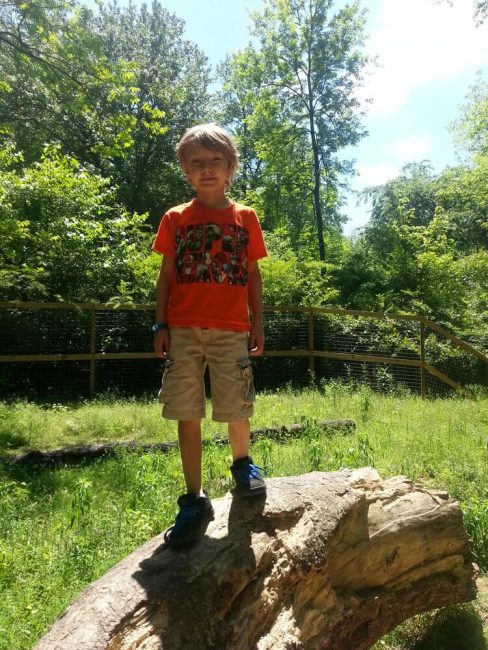 There were even more animals at Noah’s Ark, but they were hiding from the afternoon sun. So, we headed back to the entrance but not before playing in a field of yellow wildflowers and climbing another tree!! 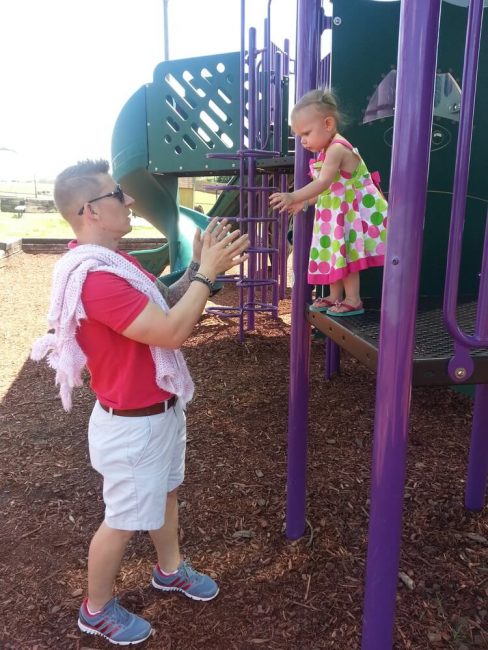 Jade was pretty tired at this point, but we had promised Gabriel he could play at the playground they have at the entrance. He had a blast on the monkey bars and Jade enjoyed the swings. But when we said it was time to go home, Little Miss had a mini melt down….Yeah, it happens. To much fun makes for one cranky and sleepy little girl. We made back to our car and headed off. Gabriel said he wasn’t tired but a quick look into our backseat proved otherwise. 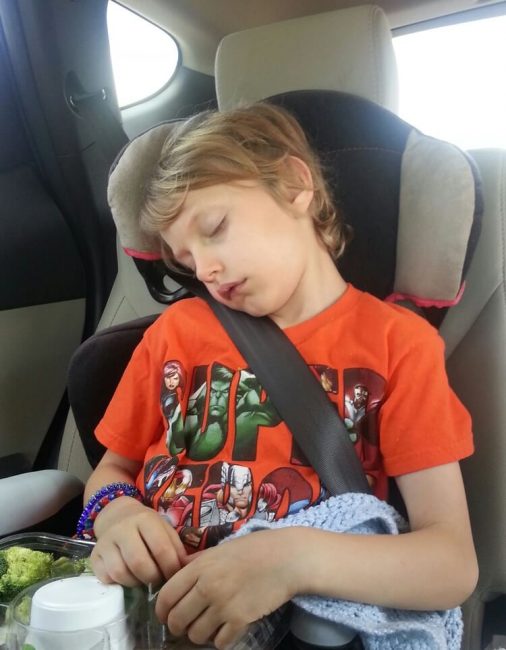