I wake up to hugs and kisses from my sweet 7 year old each morning.  With excitement in his voice he asks, ” Mama? Can we look up Dimetrodon?”.  I haven’t even wiped the sleep from my eyes yet, but manage to mumble something similar to “hmmm” and “coffee”.  As I stumble out of bed Gabriel is bouncing down the hall all the way to the dining room table where the lap top is sitting and chatting non stop about the other prehistoric creatures he wants to look up today.  I clear my eyes and clumsily type Dimetrodon in Google and pull up his favorite site Dinopedia.  He begins writing facts on a sheet of paper that he will add to his notebook of prehistoric creatures. I warm up a pot of coffee that Papa (my husband) had made earlier before he went to work. 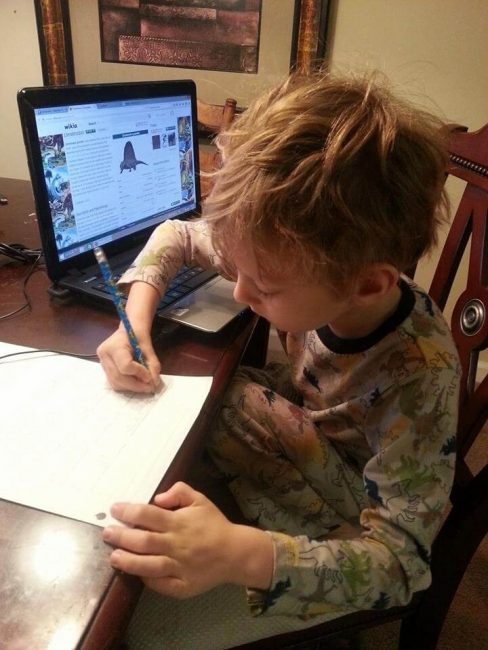 And so begins our day.  We wont be going outside on this cold wintery day. So, I’ll find lots of indoor activities to keep everyone busy.  I make my cup of coffee and go sit with Gabriel at the table and go over all of the facts he has written. He will ask his Papa to draw these creatures later today so that he can color them and then add them to the notebook as well. We talk about the time period the Dimetrodon lived in  (Permian) as well as where the fossils can be found in the world.

Our son goes and gets quickly dressed while I pull out our large world map and then proceed to go make oatmeal in the kitchen. He comes back and using the latitude and longitude coordinates I gave him finds South Africa. Then he puts a sticker there to mark the spot where Dimetrodon fossils can be found.  He does this so that he can remember all of the places he wants to dig when he becomes a paleontologist. So far his list includes Patagonia, Gobi Dessert, North Africa, and Hell Creek Montana.

He then decides he also wants to look up a Gorgonopsia (also Permian time period and can be found in Texas and Germany).  So, I pull that information up on the computer and he starts writing the facts and looking for the coordinates on the map.  Meanwhile, his baby sister Jade has woken up. So I go get her out her crib. She is adamant that she doesn’t need a diaper change but that she needs a pretty dress with a tutu instead. We compromise…a diaper change and pretty dress with tutu it is. Now breakfast time, and its not even 9am yet! 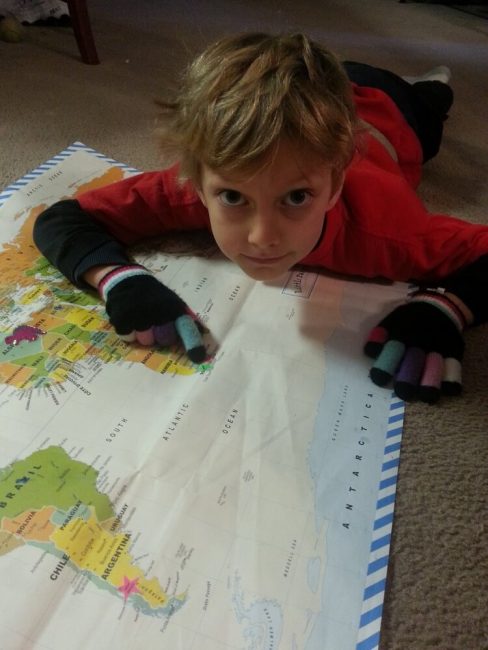 After we finish looking up all the facts on Dimetrodon, and Rubidgea Atrox, a Gorgonopsia, Papa comes home. They all play in the floor together as is tradition when Papa comes home everyday. Then its time for some chores, and lunch.  Once I have gotten everyone their lunch I must leave for an appointment.  Jade colors, plays with blocks and her baby dolls while Gabriel colors the Dimetrodon and Rubidgea Atrox that Papa has drawn.  After an hour or so, Papa puts Jade down for a nap.

When I get back home in the afternoon I get Gabriel started on his Taekwondo homework while I do laundry.  Its all about having a Positive Attitude when things are challenging and how to show Respect with 7 magic words. When done we work on his Saxon Math workbook and addition flash cards….he likes to see how fast he can add in his head. When Jade wakes up we play the music soundtrack to Grease on my phone…its her favorite! She calls it her “Shoop Bop Bop” and we dance around the living room.

When the dancing finally stops Jade goes back to building block towers and then knocking them down. Gabriel and I go snuggle in his bed and I read another chapter of The Black Stallion. Papa then goes back to work around the same time I need to make  dinner.  The children enjoy an episode of Dino Dan until we are ready to eat.

Once we have eaten and cleaned up our dishes its time for bed time stories and songs.  While Gabriel gets himself ready for bed, Jade argues with me about getting into pajamas. She is adamant that she doesn’t need pajamas or a diaper change. We compromise by letting her keep her pretty dress and tutu on and I just change her diaper.  All cuddled up in the bed, I begin to read the 14th chapter of Harry Potter and the Goblet of Fire.  Papa gets home just as I finish reading and I start singing Gabriels favorite bed time songs. Jade continually asks for “Shoop Bop Bop”….which I play lastly on my phone, because if I don’t play “Summer Nights” last, then she will never go to bed.